She linked an article about the “empirical case” for conversion therapy that claims that childhood trauma makes people LGBTQ. It doesn’t. 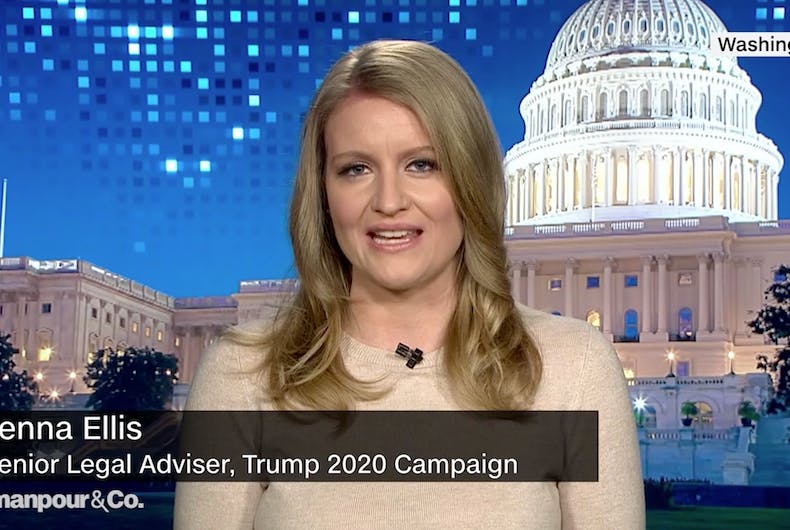 Christian conservative activist and pundit Jenna Ellis was hired by Donald Trump earlier this year as a lawyer and a legal advisor to his 2020 reelection campaign. She already had a long history of opposing LGBTQ equality, including claiming that HIV among gay and bi men is “God’s moral law and His supremacy” and testifying in favor of conversion therapy in front of a Colorado House committee.

Related: Bowen Yang from SNL was sent to conversion therapy as a teen

Ellis’s views have apparently not softened since she took on her role in the Trump campaign. Yesterday, she retweeted an article that supports conversion therapy.

“No, sexual orientation is not immutable,” the tweet said.

“The fact that many LGBT people have childhood trauma in their past argues that these experiences ought to legally be able to be explored in therapy,” Dirks wrote. “This is especially the case for minors, a group that are often singled out as a particular reason for banning therapy related to sexual orientation or gender identity.”

The tweet’s claim about a “large, longitudinal” study that found “over 80 percent of same-sex-behaved adolescents became exclusively heterosexually behaved after six years” refers to a 14-year-old study on puberty by Cornell University developmental psychologist Ritch Savin-Williams that is often cited by supporters of conversion therapy, even though the journal article was not about conversion therapy at all and, at most, referred to sexual fluidity.

In 2013, Savin-Williams wrote in another journal article that the most likely explanation for why young teens who reported being gay or bi but later identified as straight on the survey he was working with in 2006 was a combination of confusion about what the question about sexual orientation meant and “the existence of mischievous adolescents who played a ‘jokester’ role by reporting same-sex attraction when none was present.”

Dirks also wrote in the article Ellis re-tweeted that, when it comes to high rates of LGBTQ youth homeless, “family dysfunction seems to be the culprit.” For Dirks, this is evidence that bad parenting and childhood trauma make people LGBTQ, instead of the more likely “culprit”: parents who kick out their children when they come out as LGBTQ or make life so hard for their LGBTQ children that they run away.

Ellis used to work for the James Dobson Family Institute, an anti-LGBTQ organization. She has spent years ranting against the “homosexual lifestyle.”

After the 2016 Pulse shooting that left 49 people dead, Ellis worried that the deaths at the LGBTQ nightclub would be used to support “the LGBT agenda.”

“I’m disappointed conservatives are acquiescing to the LGBT agenda,” she wrote. “Let me be clear — the Orlando shooting was absolutely terrible and tragic. But the response to this tragedy should not be embracing and advocating for gay rights.”

She has also called for a “national day of prayer for President Donald J. Trump” and tweeted recently that Black Lives Matter protestors may “try to cancel Christianity.”

Whatever Donald Trump’s supporters drag up about Conversion Therapy, there is substantial evidence that; not only does it not work with those intrinsically different in their gender/sexuality identity, it can cause positive physical, mental and spiritual harm to those subjected to it – especially if the victim is subjected to spiritual coercion.

There have been cases where even excorcism has been tried and found totally ineffective in ‘curing’ the subject fo their homosexual tendencies – leading, in some cases, to the suicide of victims of this horrendous mis-diagnosis of their non-binary sexual status.

Sadly, Donald Trump, who might be considered unqualified to judge anyone else on their sexual status/identity/behaviour, seems hell-bent on discrediting anyone who does not conform to his own aggressively heterosexual persona. This may well be tongue-in-cheek stuff for him, though, who is more interested in courting those who are most likely to vote him back into presidential office

However, there are those in the U.S. (maybe the number is growing by the hour) who want him out – as witness this humorous video link: