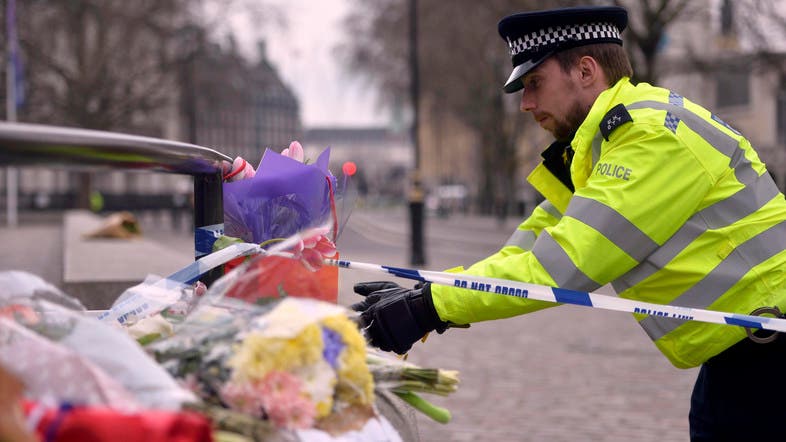 A police officer reaches out to floral tributes in Westminster the day after an attack, in London, Britain March 23, 2017. (Reuters)
Staff writer, Al Arabiya English – Thursday, 23 March 2017
The Muslim community in the UK has come together to lead a campaign in support of the victims and their families of a terror attack outside Britain’s parliament.

The campaign – which aims to raise $12,000 – has already raised half the amount just hours after launching.

Funds raised by Muslims United for London will be used to support victims and victims’ families of the terror attack in Westminster on Wednesday in which four people died and 40 injured.

“The British Muslim community stands with the community during these difficult times and extends their support in raising funds to help with the immediate, short-term needs of the families of Keith Palmer, the other victims and the families of the victims,” a statement said on the website.

“While no amount of money will bring back lives lost or take away from the pain the victims and their families are going through, we hope to lessen their burden in some way.”

To those Christians who believe that ALL Muslims are terrorists; here is proof positive that the majority of Muslims around the world are law-abiding citizens of the countries they live in – together with those of Christians and other faith communities.

The Mayor of London is himself a Muslim – dedicated to the common good of all who live in this heavily-populated European City. If Londoners were afraid to elect a Muslim as their civic leader, they would not have given him the prestige he deserves.

What God desires of all people – irrespective of their own faith community – is to learn to live together in peace and harmony – a bit like the Church itself, really.