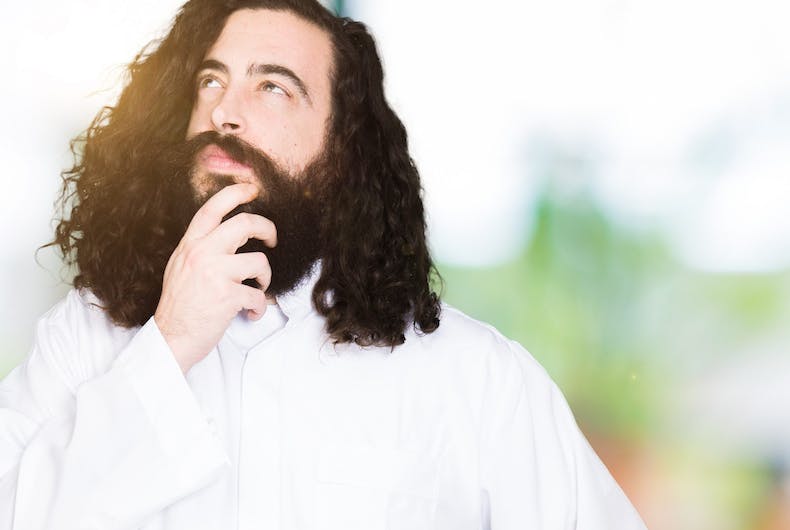 Disgraced televangelist Jim Bakker went to jail for defrauding his followers out of millions of dollars, but he’s continued his career as a charlatan by hawking “End Times” buckets of dehydrated food to gullible Christians. In between shilling for instant mashed potatoes and soup mixes, Bakker also likes to dabble in political punditry.

But this time, even Bakker may have gone too far. His live studio audience laughed instead of applauding.

Related: Right-wing preachers have turned their shows into infomercials

Bakker told viewers that the President should not be impeached and the only way to salvation is through Donald Trump.

The scamvangelist told followers that they should “forgive” Trump because it’s the Christian thing to do. Trump, though, infamously said he never asks God for forgiveness.

“You know what? Trump is a test whether you’re even saved,” Bakker said to hammer home his theory that Trump is a test of faith for Christians. “Only saved people can love Trump.”

Bakker was convicted on 24 counts of fraud and conspiracy when his television network went under after he fleeced the faithful of millions of dollars that he spent lavishly on himself. He had resigned shortly before that after a sex scandal.

As any real preacher can tell you, the entire point of Christianity is that you can only be “saved” by believing in Jesus Christ as the messiah. The Bible does not mention Donald Trump, who cannot even name one Bible verse or pronounce the name of Biblical books correctly.

Evangelical Christians are the President’s biggest supporters. White evangelicals are the least Christ-like according to a new poll of religious people.

This sort of rhetoric – now reported in the USA, as a general conservative Evangelical theme presenting President Donald Trump as ‘God’s Anointed Leader – is actually doing a grave disservice to the cause of the Christian Gospel.  Most Christians would not consider Trump to be any sort of advertisement for the practice of Christian ethics, embracing, as he and his cohorts do, a way of life that can be seen as contrary to the message of Jesus Christ.

However, the sad reality is that many conservative Christians see Trump as their defence against social diversity and the promotion of an economically-balanced society – both local in the U.S. and on the broader world front. His appeal to a strident self-interested American nationalism – though not too different from that of Britain’s support for Brexit – is seen as particularly harmful to the practice of world trade and world peace. Trump’s epic, wilful determination, for instance, to cut off its southern border with Mexico is just one instance of Trump’s intention to isolate the United States of America from outside influences that he sees as weakening America’s status as the dominant world power.

When such an agenda is adopted and actively embraced by a particular Christian sect or grouping this inevitably calls into question aspects of the Gospel message of Jesus that emphasize the need for peace and cooperation amongst all peoples of the world – in order to deal with matters of poverty, social well-being, and the health of our planet. These elements need to be embraced as of mutual concern to all nations, requiring a modicum of diplomacy and Christian cooperation and mutual concern for ALL people that alone can ensure the existence of future populations of our world.