The ‘Madness’ of Mercy – Pope Francis

The ‘Madness’ of Mercy

What’s at the Center of Francis’s Papacy? 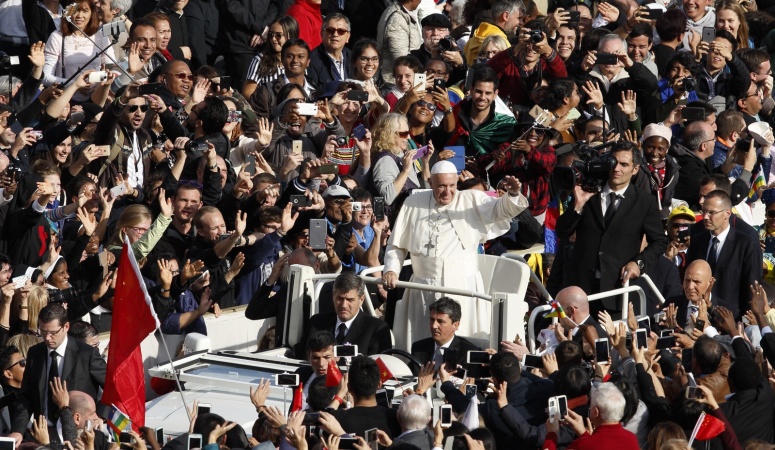 When Hannah Arendt reviewed Pope John XXIII’s journals just over fifty years ago, she shared a question posed to her by a Roman chambermaid not long after he had died. “Madam,” the woman said, “this pope was a real Christian. How could that be? And how could it happen that a true Christian would sit on St. Peter’s chair?” Arendt took the comments to underscore the tension between the radical simplicity of Jesus’ call to “follow me” and the demands of the institutional church. After all, as the future pope scribbled in his notebook when he was only eighteen years old, taking that call seriously put one at risk of being “treated as a madman.”

Pope Francis, who declared John XXIII a saint and whose own pontificate draws frequent comparisons with that earlier pope, surely understands the truth of that observation. Francis has been described in similarly unfavorable terms by his critics; some have even compared him to a real madman, president-elect Donald Trump. And even a few of his admirers, especially in the mainstream press, sometimes seem disturbed by his words and deeds, surprised by a pope who seems not only to believe but to act as though the meek really will inherit the earth. Depending on the newspaper or magazine one reads, Francis is either too reckless or too conservative, a possible heretic or a false hope. His off-the-cuff pronouncements reliably stir controversy; his openness to reform generates theological sparring and debate. Meanwhile, the usual swirl of Vatican gossip and intrigue continues apace.

In the midst of all this, one could be forgiven for not remembering that Francis himself has told us what is at the center of his papacy, the thread that holds it all together: mercy. He took as his episcopal motto miserando atque eligendo—“by having mercy and choosing.” His apostolic exhortation, Evangelii gaudium, urges us never to stop seeking God’s forgiveness, never to despair of being beyond the reach of God’s mercy. And last year, Francis called an extraordinary jubilee—the Year of Mercy—which has just come to a close. The message could not be less subtle. It is worth stopping to reflect on what Francis has described as “the very foundation of the church’s life,” now, while the Year of Mercy remains fresh in our minds and Christmas is upon us.

We shouldn’t be surprised that such an emphasis on mercy has been misunderstood, willfully or otherwise, and left more than one of the church’s factions dissatisfied. Against a stringent conservatism, dwelling on mercy appears as a kind of antinomianism: a breakdown of rules and order in favor of freewheeling forgiveness, a weakening of morals and a soft-peddling of ethical demands. Against the more thinned-out versions of religious liberalism, it can seem too “existential,” too focused on the darker currents of our lives—the “wounds” we suffer from, which need to be healed. And while mercy should be joined to hope, it is neither naïvely optimistic nor ideologically progressive. It is costly love in the midst of pain and grief, not false cheer.

Mercy for Francis is never simply a matter for individuals, a kind of privatized consolation or a form of cheap grace. He wants nothing less than to build a “culture of mercy.” This can be seen vividly in the way Francis has asked us to understand Laudato si’: not as an encyclical that merely endorsed the scientific consensus on climate change, but as a call to conversion in how we relate to the resources we all share. “The object of mercy is human life itself and everything it embraces,” the pope reminds us. That includes our stewardship of creation, leading Francis to suggest “a complement” to the traditional sets of seven corporal and seven spiritual works of mercy. “May the works of mercy also include care for our common home,” he said in September, going on to demand that we “break with the logic of violence, exploitation and selfishness” that afflicts our political and economic life and make mercy itself “felt in every action that seeks to build a better world.”

As the church struggles with its own divisions, and as the United States and the world enter dark political times, Francis’s message of mercy should be a light to our path. He has staked his papacy on that message, offering it as the only answer to our deepest questions and longings. In a world that “leaves so many men and women behind as it races on, breathlessly and aimlessly,” he recently said, “we need the oxygen of this gratuitous and life-giving love. We thirst for mercy and no technology can quench that thirst. We seek a love that endures beyond momentary pleasures, a safe harbor where we can end our restless wanderings, an infinite embrace that forgives and reconciles.”

The jubilee may be over now, but the need for mercy never ends. Neither does God’s offer of it. That should be at the heart of our attempts to understand this pope—and the source of our hope in the difficult days that may lie ahead.

‘COMMONWEAL’, the U.S. Roman Catholic publication, deserves to be read for its open discussion of contemporary theological views with the Church in the world of today. The following link gives links to articles about The Church and Same-Sex Relationships which is well worth reading: https://www.commonwealmagazine.org/catholicism-same-sex-marriage

5 Responses to The ‘Madness’ of Mercy – Pope Francis