The church is, once again, at a crossroads

The article below the line here, from N.C.R. writer Joe Ferullo, though written from a Catholic perspective, could well apply to all Christian Churches on the planet. As probably the largest Christian Church. Roman Catholics have a similar trajectory of growth and decline as the rest of us who struggle to live out the Spirit of Christ in the gospels in today’s rapidly-changing world.

At the heart of Joe’s article as the newly fledged C.E.O. of N.C.R, is this statement:

“Pope Francis is pushing for a more open church — a renewal and reinvention of the spirit of Vatican II. At his direction, dioceses around the world held synodal meetings: listening sessions with average, everyday parishioners. Participants demanded greater roles for women, a warmer welcome for LGBTQ+ Catholics and greater attention to the plight of the poor. Over and over, they criticized how leadership has polarized and politicized the church.”

We Anglicans, too, have an urgent need to rec9ognise and minister to the real needs of people in our own time and context. With the rise of the ‘Religious Right’ in the U.S.A. – replicated in the outdated views of some if it’s House of Bishops in the Roman Catholic Church – there is a desperate need not to reach back into a culture of ‘oughts and shoulds’, but rather to trust in God’s infinite grace and mercy to help us address the real and tangible need of all people to hear, and see at work in the Church; the grace and empowerment of Jesus Christ for hope for the future. 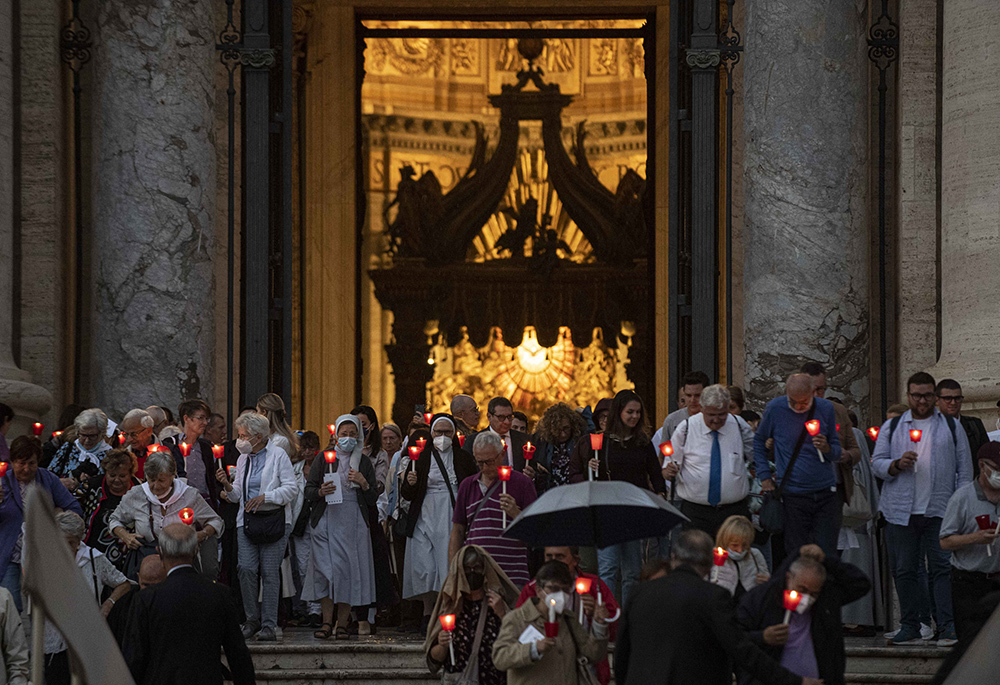 This is my first time writing for this space since I became publisher of the National Catholic Reporter just a couple of weeks ago. I’m new to the job (OK, very new) — but I’m not new to NCR and what it means to so many people.Back in 2009, I found myself at a confusing crossroads. The church seemed then to be making an especially sharp and obvious shift in a certain direction. Bishops in the U.S. dove headfirst into politics, attacking then-President Barack Obama’s Affordable Care Act, despite the relief it would bring to millions without health care. Around the same time, the Vatican launched an investigation into the “quality of life” of American nuns, apparently worried that they were simply not Catholic enough.That culture shift — a long time coming, in many ways — felt like a direct challenge to parts of the church that still held on to the spirit and progress of Vatican II, to special concerns for the sick, the poor, and the forgotten. It was as if the leadership were saying: Tried that. Didn’t work. Time to step away. But that wasn’t my experience. By an accident of grace, I grew up in a working-class Irish-Italian-Latino parish in the Bronx, New York, that completely embraced the changes of Vatican II. We had “hootenanny Masses,” which inspired me to learn guitar and play “Here We Are” constantly around the house. Sister Maryann, my sixth grade teacher, sometimes taught us Joni Mitchell songs instead of long division. Nuns removed their old-style habits; religion classes became dialogues rather than rote recitation of the Baltimore Catechism.Over the years, the memory of that energy and innovation kept me Catholic, even as society turned more secular. And yet those memories suddenly seemed under attack. I decided to write about my particular Vatican II experience before it was pushed underground, before my version of that era became some alternative history that no one spoke of anymore.

But who would publish something like that? Secular media didn’t care enough. Most Catholic media I knew of would hesitate to swim against the obvious Vatican tide. Then, thanks to a friend, I got to meet NCR’s publisher, Joe Feuerherd, at a Los Angeles event. I told him about what I’d written — and Joe’s eyes lit up. He published “When Vatican II came to the Bronx” in the paper and online in the summer of 2009.Sister Maryann from sixth grade read it, found me and called. Sister Ellen Marie, who taught my daughters when they were little, sent a letter from her retirement home. Even some friends from the old neighborhood saw the essay and got back in touch.And so began a beautiful friendship with this newspaper. While working as a television executive in Hollywood, I continued to write when I could for NCR. In 2018, I joined the board of directors.Now, as CEO and publisher, I’m working for NCR when the church is, once again, at a crossroads. Pope Francis is pushing for a more open church — a renewal and reinvention of the spirit of Vatican II. At his direction, dioceses around the world held synodal meetings: listening sessions with average, everyday parishioners. Participants demanded greater roles for women, a warmer welcome for LGBTQ+ Catholics and greater attention to the plight of the poor. Over and over, they criticized how leadership has polarized and politicized the church. You could call these people “Francis Catholics” — they are, in many ways, a new generation of engaged believers, energized by the hope for change and growth.But, at the same time, defenders of tradition have dismissed or downplayed those voices. Here in the U.S., the Catholic bishops’ conference just elected conservatives to nearly every important leadership role — including the group’s new president, Archbishop Timothy Broglio. Our columnist Michael Sean Winters writes that “it is difficult to overstate what a repudiation of Pope Francis the selection of Broglio to lead the conference is.”

The pope will, nonetheless, press his case further: He has called for two global synods in Rome, in 2023 and in 2024, and will likely pursue at least some of the reforms that have emerged from those parish listening sessions.

It’s impossible to know where that path will lead by the end of 2024 — but these next two years could easily turn out to be the most decisive since Vatican II.TWEET THIS

At stake: What path does the church take in the generations ahead? Does it expand the tent and reach out, or does it circle the wagons and close in? It’s impossible to know where that path will lead by the end of 2024 — but these next two years could easily turn out to be the most decisive since Vatican II.All of which makes NCR more important than ever. In the coming months, readers will count on us to synthesize and analyze everything going on in Rome, Washington, and all the parishes and points of power in between. Thanks to you and your support, I know we will deliver the reliable, trustworthy journalism you depend on.  In the meantime, if anyone knows of a good hootenanny Mass still going on every Sunday, please let me know. I really miss them. And tell the pastor: I can bring my own guitar