SYNOD of ALL Catholics – Accent on Pastoral Ministry

Most Anglicans are used by now to the fact that Synodical Government – with participating voices from bishops, clergy and laity – is a preferred way of discerning: “What the Spirit is saying to The Church”. This has long now been perceived as a more satisfactory of recognising what has been referred to in the Scripture as: ‘the priesthood of ALL believers” – a category of lay inclusion that may not, hitherto, have been fully recognised in the Roman Catholic Church.

In a remarkable burst if spiritual insight – and recognising the normally doctrinaire appearance of the Roman Catholic Church to its Faithful Laity – Pope Francis has recently initiated a system of synodical Church government where the Faithful have their own place in decision-making about how the Church – especially its clergy – operates, to deal with the pastoral needs of all people, without prejudice.

The Roman Catholic Church in South Africa has now come to an understanding of this need for more Lay participation in the life and ministry of the Church, looking for the extension of its facility for both ministry and mission – as ‘Children of God’ – lay and clergy together equipped and called by God to share more fully in governance, ministry and administration. The fact that there is a call from the laity to extend clerical ordination to married men and even to women, is a sign of a more open society being encouraged within the Church.

This article appears in the Synod on Synodality feature series. View the full series. 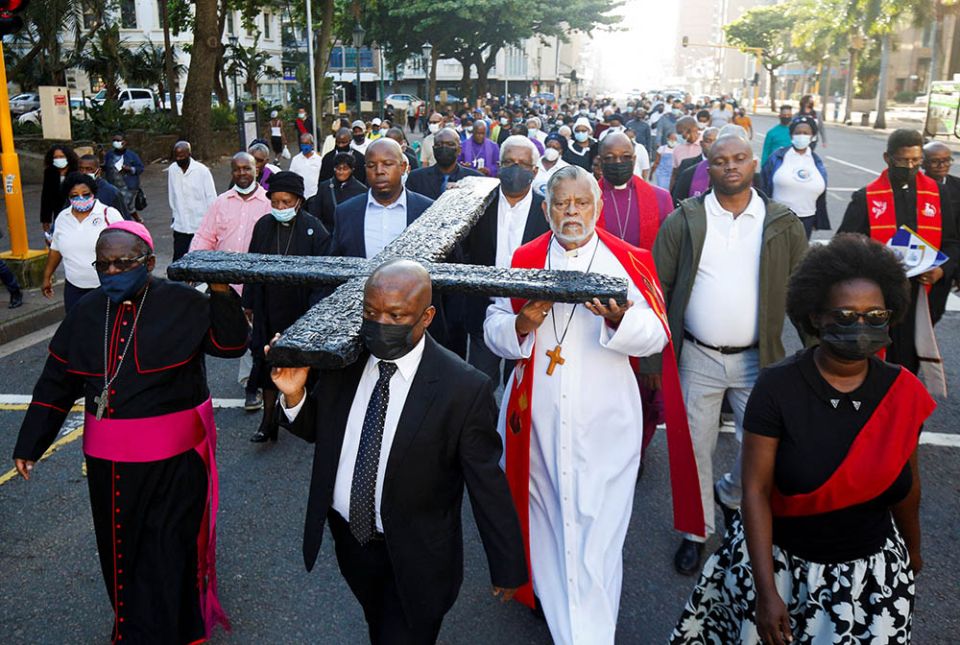 Widen the preaching circle to women and other laypeople, change the leadership style from autocratic and bureaucratic, move away from clericalism, and build more inclusive and welcoming communities, say Southern African Catholics.

These were some of the major themes that emerged in the synthesis document for the synod on synodality released by the Southern African Catholic Bishops’ Conference at the end of August. The conference represents the Catholic bishops of South Africa, Botswana and Eswatini.

The secretary general of the bishops’ conference, Fr. Hugh O’Connor, said that the synthesis aimed to reflect the wide range of opinions mentioned in the diocesan reports. “No attempt was made to weigh anything as no votes were taken,” he said.

The synthesis, from 29 dioceses in the conference area, begins by acknowledging that there were a “variety of engagements with the synodal process ranging from enthusiastic involvement to opposition to the process.”

Jesuit Fr. Bruce Botha, the vicar for evangelization in the Johannesburg Archdiocese who led the diocesan process, thinks the “synthesis did reflect what was being said about women, youth and the LGBTQ+ community in the diocese.”

He said that things may have been said more forcefully in the diocesan report but that the synthesis had captured the fruit of the dialogue of the diocesan process.

The conference acknowledges the impact of the COVID-19 pandemic on the process. “Many parishes, communities and groupings were, at the same time as the synodal process, trying to rebuild and regroup. They thus faced the challenge of smaller numbers, the inability to gather freely, continued government restrictions and sense of apathy that the pandemic seemed to cause while at the same time trying to re-establish regular parish life.” 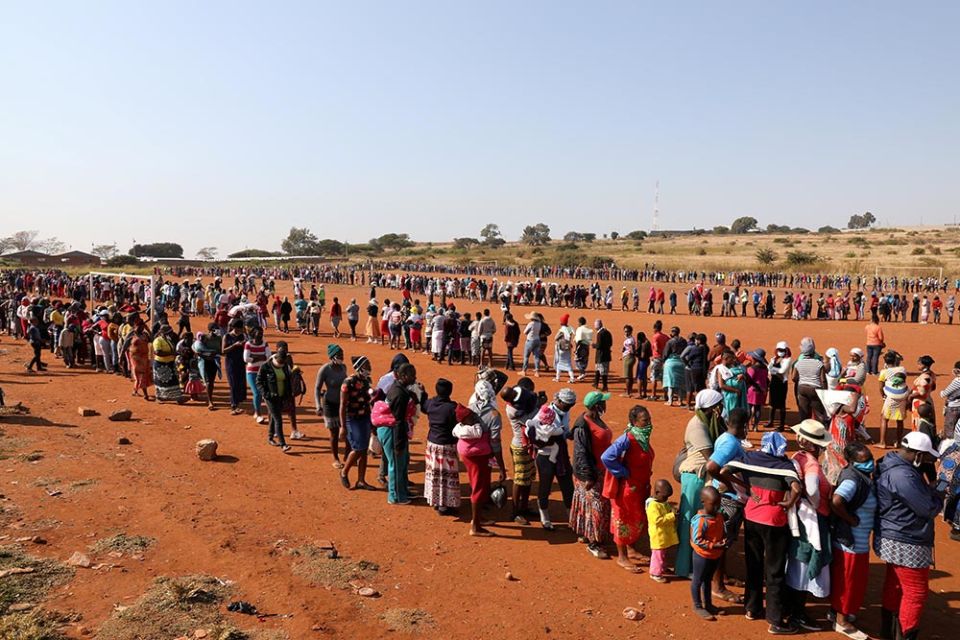 People in Laudium, South Africa, stand in line to receive food aid May 20, 2020, amid the COVID-19 pandemic. (CNS/Reuters/Siphiwe Sibeko)

Although there were differing views, the synthesis document reports that across both rural and urban dioceses, questions about “the Church’s teaching on abortion, contraception, ordination of women, married clergy, celibacy, divorce and remarriage, Holy Communion, homosexuality” were raised.

While it says that many were happy with the ministry of priests, the synthesis points out several issues surrounding the lives and ministry of priests. The concerns expressed range from ineffective work to low moral standards and financial abuse. “Lack of liturgical and preaching preparation, apparent poor education and the lack of basic pastoral skills” are also cited.

“There also needs to be a movement away from clericalism and a clergy centered community to greater involvement of all in the life and running of the Church,” it says.

The synthesis goes on to name several concerns with clergy, including a “variety of attitudes taken towards women, youth, LGBTQIA+ community, difficulty with relating to other men, lay involvement and priests not being able to minister in communities [where] they are assigned.”

People expressed concerns about the impact of the poor example and behavior of clergy on vocations and the happiness of the laity. “The average Catholic wants a good, holy priest pastoring and ministering to them and an alive and active community.”

The synthesis says that the kind of participation Catholics in Southern Africa want is one in which “the gifts of all members are used e.g. opening preaching to lay people including women, widening involvement in ministries and responsibility.” There is a call for the ordination of women to the diaconate and married men to the priesthood.

“A great deal of comment was offered on the state of the youth and their presence in the Church,” the document says. It points out that the youth are not the future but the present of the church. The participation of young people in the synodal process ranges from active to total absence, it states.

“There is a general concern that many young people leave the Church after Confirmation if they even get there,” it says. The reasons given are “hostility towards youth, intergenerational conflict, [the] role of parents, teenage pregnancy, Church’s moral teaching, temptations in the wider world, lifestyle choices and the lack of attractiveness of the Church.”

The synthesis lamented the lack of involvement of religious — especially women — in diocesan structures. Religious women want “to be taken more seriously and acknowledged for their contribution to the life of the Church and not to be treated like second class members.”

The report identifies the shortage of priests as a challenge, along with priests “who make their own rules and push their own agendas, moral decay amongst the clergy, the lack of respect and participation, ministry to families, the failure to use resources properly.”

In some places, the report says that structures, like diocesan pastoral councils, parish pastoral councils and finance committees, are not appropriately utilized for full participation. “It is perceived that the priest, certain families or individuals dominate these structures, keeping others out,” the document said.

The report also flags issues around the [refusal] of baptism to children of unmarried mothers and the treatment of divorced people. It says that people who suffer marriage breakdown “appear to be stigmatized.”

‘There are new realities and it is within these changed realities that we live our faith.’

There were requests for the church to relook at issues like divorce, remarriage and contraception. The synthesis says, “There is a strong need to look beyond the idea of heterosexual marriage to other forms of being family — single parent, LGBTQIA+, multigenerational and blended families and adoption.”

It also calls for more space to discuss issues affecting families and marriage “without being shut down by the law or morals of the Church.”

While there is an appreciation of church leadership, some expressed the desire for a change in leadership style from “the tendency to be autocratic and bureaucratic to being more listening, open and consultative.” Both laypeople and clergy expressed this desire.

People were critical of the bishops for their “lack of transparency about [the] sexual and financial crises” and their “lack of leadership in terms of international and national events.” There was also criticism for how they handled the abuse crisis and the resulting poor public image of the church.

“There is the constant request for better catechesis and ongoing faith formation for all,” the document said. The synthesis says that all the responses “indicated the definite vision of a Vatican II Church” and that there is “the desire to grow this vision.” It says that people desire good liturgies that bring communities together.

The synthesis acknowledges that some responses “were harking back to a past that has largely disappeared” but that there was “no concerted effort to impose such a vision on others.” It was more a “remembering of the good old days” and realizing that the world, church, circumstances and awareness have changed.

It says: “There are new realities and it is within these changed realities that we live our faith. 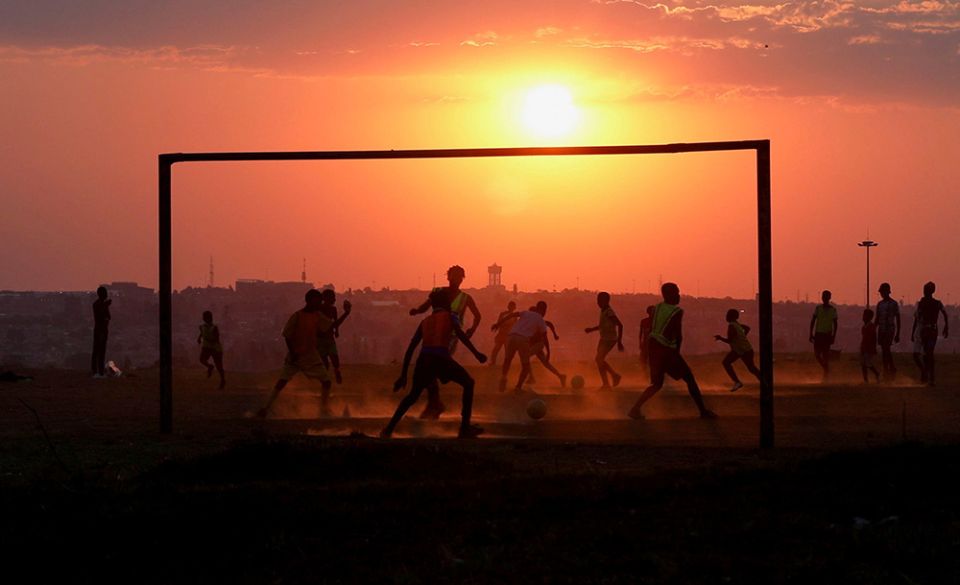 “The Synod offered the Church a wonderful opportunity to reconnect and to discover anew a way of being community,” the document said. This was important in a post-COVID setting. The synod process drew people back and showed a real hunger to “once again come together to pray together whether that be in the Holy Mass or in more informal settings.”

In addition, it served to “rebuild a sense and appreciation of the importance of the local Church community.”

The synthesis concludes that the process cannot be evaluated by the number of people involved or “the answers given, whether agreed with or not.” Instead, the “quality of listening, dialogue and desire to relate in new ways” is most important. “To achieve this, there needs to be a change in style, formation at all levels for new ways to emerge.”

“This synodal process has been invaluable in helping reflection on the implementation of the Pastoral Plan,” the report said. It encourages the local church to enter a phase of studying the diocesan reports so that, where possible, they can implement practical ideas and suggestions. “This will give people the confidence that there is action.”

Pretoria, South Africa, Archbishop Dabula Mpako — who is responsible for the synodal process in the conference — said the outcomes of the process “are and will still be of great help to different dioceses.” He said that a lot of work needs to be done to continue the listening and dialogue that has begun.

O’Connor, the secretary general, believes that the reports and synthesis document can only be brought to life by a continued renewal of the church, “not in structures but relationships.”

The synthesis ends by acknowledging that the most significant and most challenging task is “to change the culture in the Church where necessary to create an atmosphere and a practice that includes more listening and dialogue in the search for greater communion, participation, and mission in the Church.”