Women and The Church – New Zealand

We Anglicans have long prided ourselves on the radical inclusion of women as part and parcel of the ministry and mission of our churches around the world. Now is the time for Roman Catholic women to be accorded what they feel is their due, as fully integrated members of their own Church community.

There are already Catholic prelates in certain countries of the world who are calling for a new assessment of Christ’s liberating attitude towards the women of his day – at a time when such recognition of ‘women’s rights’ was unpopular with the Jewish religious authorities. The institutional Church has long been a preserve of a more patriarchal understanding of the place of women in the Church and society.

However. in a time when women are assuming, and capably dealing with, ever more demanding positions of leadership and authority in the public place (Heads of State, Prime Ministers, Surgeons, Business Executives; etc.) there is a sense of the Church being captive to that understanding of gender-bias, that no longer seems to fit the needs of either women, or the modern world in which we all live.

Even the suspected misogynist Apostle Paul, was able to understand at some point in his ministry that “In Christ, there is neither male nor female……..ALL were born of the same Spirit” 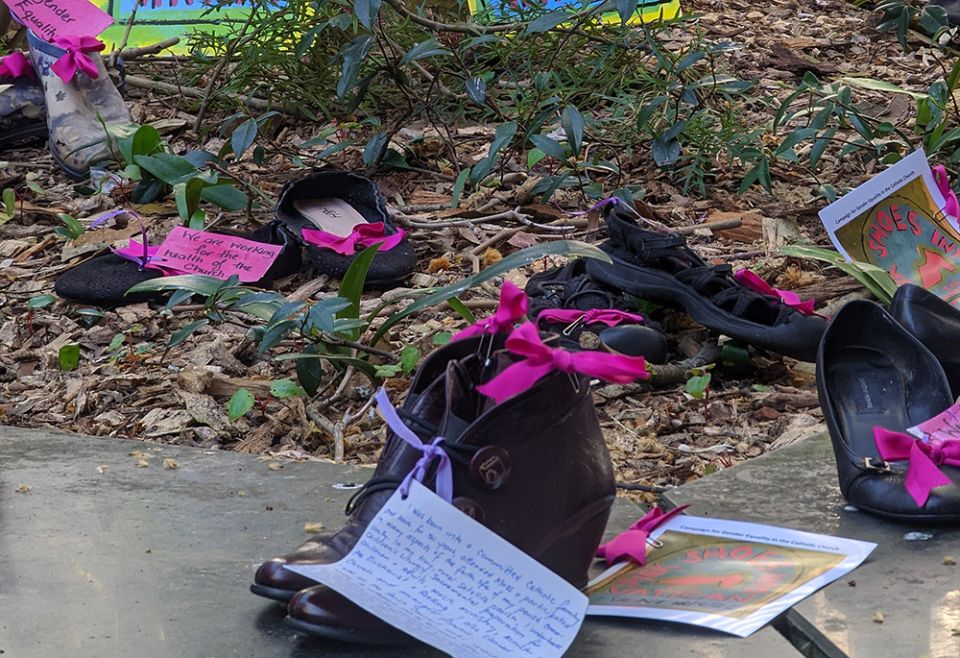 Women’s shoes are seen during the “Pink Shoes into the Vatican” event Sept. 18 in Auckland, New Zealand. (Courtesy of Luc Powell)

Hundreds of Catholic women in New Zealand contributed to a provocative public art protest on Sept. 18 calling for equality of women in the church. The event took place in Auckland, the nation’s largest city, and Wellington, its capital.

Called “Pink Shoes into the Vatican,” the event consisted of an installation of hundreds of pairs of shoes donated by women around the country that were lined up on the streets leading up to both cities’ cathedrals.

Tied to each pair of shoes was a label from its owner describing their contribution to or aspirations for the church. Many of these were heartfelt expressions of sadness and anger or pleas for change. A promotional video released ahead of the event showed some of the shoes and their labels. 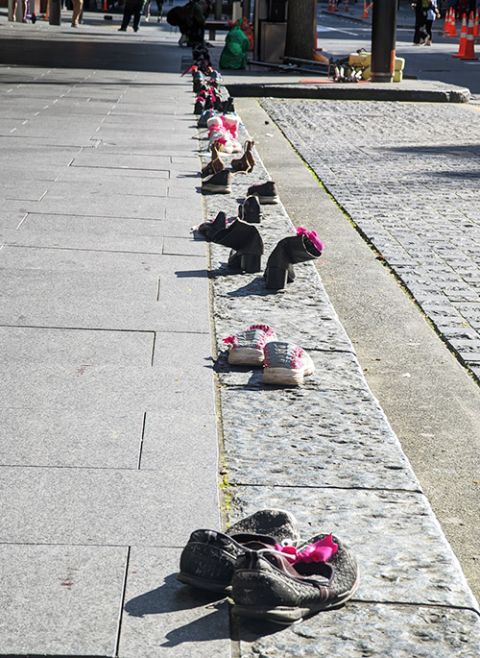 Women’s shoes are seen during the “Pink Shoes into the Vatican” event Sept. 18 in Auckland, New Zealand. (Courtesy of Luc Powell)

The installation was supported and received by church officials in the two cities in markedly different ways. In Auckland there was a surprisingly positive response. In Wellington, things were a bit different.

The event was staged by a group called “Be the Change, Catholic Church, Aotearoa” (Aotearoa is the Maori name for New Zealand). It was formed in 2020, first in Auckland, then in Wellington, by Catholic women who are agitating for gender equality in the church.

Jo Ayers is a founding member of Be the Change in Auckland and one of the organizers of “Pink Shoes into the Vatican.” She has master’s degrees in anthropology and liturgy, the latter from University of Notre Dame in Indiana in the United States and teaches at theological colleges in New Zealand. She’s unapologetic about the Pink Shoes event being deliberately provocative.

“I have a friend who talks about us being in a ministry of irritation,” she told NCR. “We held the ‘Pink Shoes’ event to keep the topic talked about. It’s to make people aware there are members of the church, there are women who recognize the church really needs change and have already done some work on what those changes might be.”

“We’re hoping to reach people in the church, but I’m also interested in people who are on the margins or who’ve left the church,” she said. “There’s lots of Catholic women who’ve said they’ve had enough and quit.”

The inspiration for the name of Sunday’s installation was the “Pink Smoke Over the Vatican” protest held in Rome during the 2013 conclave that elected Pope Francis. It was orchestrated by the U.S. group Women’s Ordination Conference. During the conclave, participants in that event lit pink smoke flares to rival the white smoke that would signal the election of a new pope. 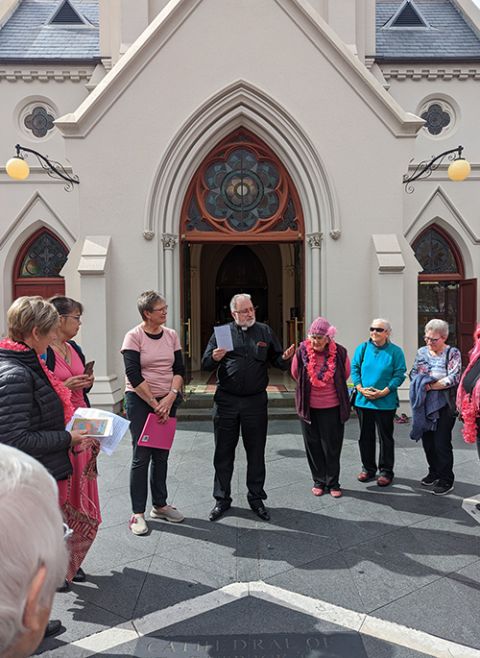 Fr. Chris Denham, dean of St. Patrick’s Cathedral in Auckland, greets participants at the “Pink Shoes into the Vatican” event in that city on Sept. 18 (Courtesy of Luc Powell)

“Pink Shoes into the Vatican” was timed to be held the day before Women’s Suffrage Day in New Zealand. Women were granted the right to vote there on Sept. 19, 1893, making it the first country where women could vote in parliamentary elections.

In Auckland, Jo Ayers and other organizers laid out the shoes along the streets leading from the Suffrage Memorial to St Patrick’s Cathedral. There they received from Fr. Chris Denham, the cathedral’s dean, a letter of support from Bishop Stephen Lowe, who was away from the diocese. Ayers described the atmosphere as festive and not confrontational.

“It was positive, it wasn’t acrimonious or aggressive,” said Ayers. “Onlookers were very interested and a lot of people asked us about it. It’s women’s suffrage anniversary and we’re saying through our event that even though women can run New Zealand — we’ve had women as prime minister, governor general, and chief justice — in the church we’re second class and we’re saying to the church it’s time for change.”

In Wellington, the placement of shoes started at Parliament House and finished at Sacred Heart Cathedral just a few blocks away. Cecily McNeill is founder of Be the Change in Wellington and one of the organizers of the “Pink Shoes” event there. She said she’s been active in the church all her life, leading church music and being involved in social justice groups. She has a theology degree and for nine years was editor of the archdiocesan newspaper. She says that religious and clergy were notably absent from the “Pink Shoes” event except for one priest who was sympathetic.

“There was only one priest there, an elderly Marist, and he made a couple of points,” McNeill told NCR. She said the priest compared the treatment of women in the church to the treatment of slaves. 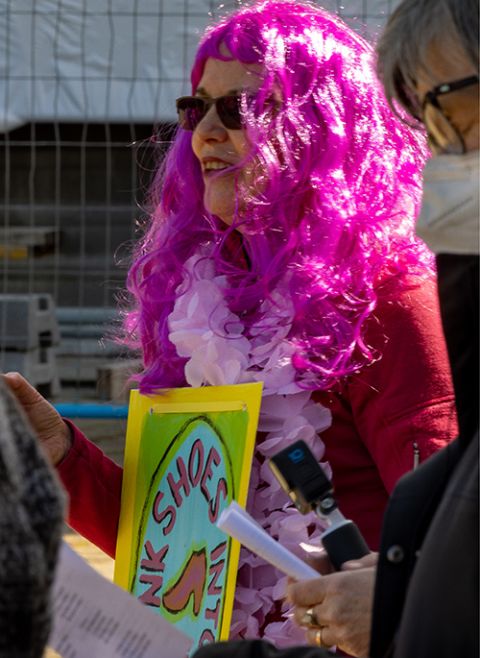 Cecily McNeill, founder of the “Be the Change” in Wellington, during the event in that city on Sept. 18 (Courtesy of John Murphy, CathNews New Zealand)

“You go into any church before Mass and there are lots of women preparing for the liturgy or doing the music, and you don’t see many men doing that sort of stuff,” said McNeill. “And of course not many women get paid for that sort of work.”

McNeill said that Wellington Cardinal John Dew initially had been supportive of the “Pink Shoes” event. But when it came close to the time of staging it he was away from the archdiocese and the women had to work with Coadjutor Archbishop Paul Martin. When they asked Martin if they could advertise the event through Wellington parishes he refused, McNeill said.

In an email that McNeill shared with NCR, Martin said the event had “more of a focus of making a statement and furthering a particular point of view, rather than for building up of the Church community.”

NCR approached Martin for further explanation of why he refused the women’s request and he replied saying that apart from his letter to McNeill, he had “no further comment to make regarding this.”

In contrast, Lowe in Auckland apologized in his letter to “Pink Shoes” organizers for not being able to join their event. He called it a “hikoi,” a Maori word indicating a “journey with a purpose.”

Lowe also referenced the New Testament’s account that Mary Magdalene was the first person to see the risen Jesus, and when she announced this to the disciples they didn’t believe her.

“Perhaps this is a poignant reminder that the Twelve and their successors can get it very wrong,” wrote Lowe. “May we have the courage not to get stuck in the structures that are not necessarily of God.”

Lowe also thanked the organizers for a pair of women’s shoes they’d given him at an earlier meeting.

“They remain in my office and are certainly a talking point,” he said. “They also remind me that I too need to be the change. Together may we be docile to the movement of the Holy Spirit who is active in all the people of God as She invites the Church ever more forth on the way to the Kingdom of God.”

Ayers said she was delighted at Lowe’s response, and pleasantly surprised by his use of the female pronoun “She” for the Holy Spirit. 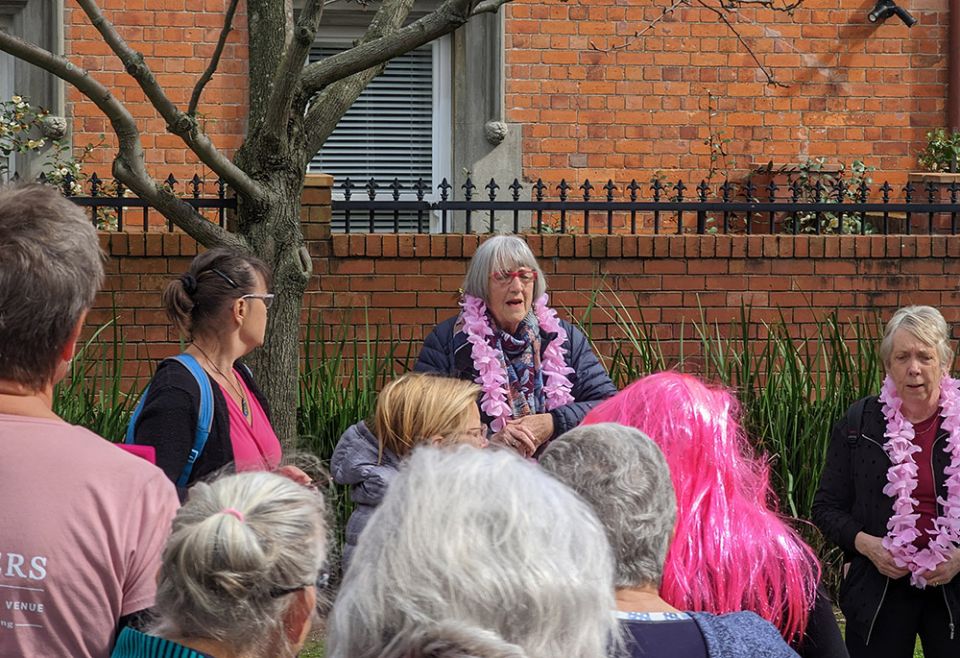 Jo Ayers, founding member of “Be the Change” in Auckland, speaking during the event in that city on Sept. 18 (Courtesy of Luc Powell)

“He’s making a big theological statement there, he’s on board,” said Ayers. “You can’t gender God. God is male and female. We attempt to describe God but we can’t. And using the female pronoun jolts people into recognizing that our traditional view of God as an old man, or young man, or whatever, we’ve just got to push out from that.”

Ayers said she was greatly encouraged by the “Pink Shoes” event and Lowe’s support. She said she plans to invite the bishop to attend her Sunday worship community.

In Wellington, McNeill is not so sanguine about changes for women in the church.

“It’s almost 60 years since Vatican II started and not much has changed,” she said. “In fact I think we’ve gone backwards. There’s a lot that came through in Vatican II but that’s been lost. I have hope because it would be beyond me as a Christian not to have hope, but I’m not terribly optimistic.”

Peter Kirkwood is a freelance journalist specializing in coverage of religion based in Sydney. He has a master’s degree in theology and worked for 23 years in the Religion Unit of the Australian Broadcasting Corporation.