Posted on September 8, 2022 by kiwianglo

Thanks to Catherine Pepinster, author of this N.C.R. article, for her lovely tribute to Queen Elizabeth II of England, who died at her Balmoral Castle Scottish home on Thursday September 8, 2022.

As the monarchical descendant of King Henry 8th of England, whose thesis on The Mass gained him the title: Fidei Defensor (Defender of The Faith) the Queen has been – throughout her 70 years as the Constitutional Monarch – a staunch and vocal practising Christian.

Her Majesty has regularly and consistently borne evidence to her own deep faith in Jesus Christ – albeit as Constitutional ‘Defender of the Faith’ as an Anglican – she was always ready to embrace the faith of other Christians; and was respectful of the people of ‘Other Faiths’ who made up parts of the British Commonwealth of Nations over which she presided so faithfully.

After a long life of service to her subjects, may Queen Elizabeth II now Rest in Peace and Rise with Christ in Glory! AMEN. 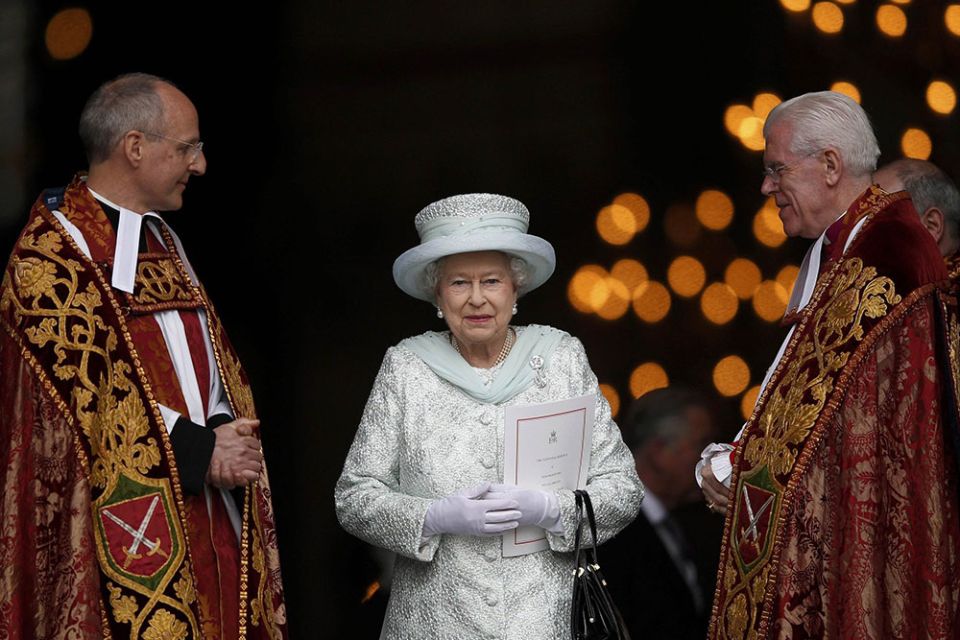 Queen Elizabeth II, who died Sept. 8 at the age of 96, was the longest-serving monarch of the United Kingdom. As a constitutional queen, she had no political power, though a significant role in the political framework of the nation, and she also had a major constitutional role regarding religion, given that Britain — or at least part of it — has an established church.

That religious role was one that other monarchs have had since the time of the English Reformation, when England broke away from the Roman Catholic Church. But what Elizabeth also had, and for which she was deeply respected, was a profound personal Christian faith — a faith she publicly articulated more frequently as she got older.

In 2022, to mark her Platinum Jubilee — she succeeded her father, King George VI, in February 1952 — she was awarded the Canterbury Cross, a special award of the Church of England, for those who have given it exceptional service. Her role as monarch and as supreme governor of the Church of England made it somewhat inevitable that she gave exceptional service — nobody else but the monarch could have given it.

But it was clear from the citation, written by the archbishop of Canterbury, Justin Welby, that he and fellow Anglicans were celebrating not only 70 years of her constitutional role regarding the church, but they were recognizing the importance of her personal faith.

He wrote: “Throughout her reign, Her Majesty has duly upheld both the Christian religion and the Church of England in her roles as Defender of the Faith and Supreme Governor of the Church of England. Whether in the formality of opening sessions of General Synod or the more intimate context of her personal addresses to the nation and Commonwealth at Christmas, Her Majesty has made manifest her own deep faith and its relevance to all that she undertakes.” 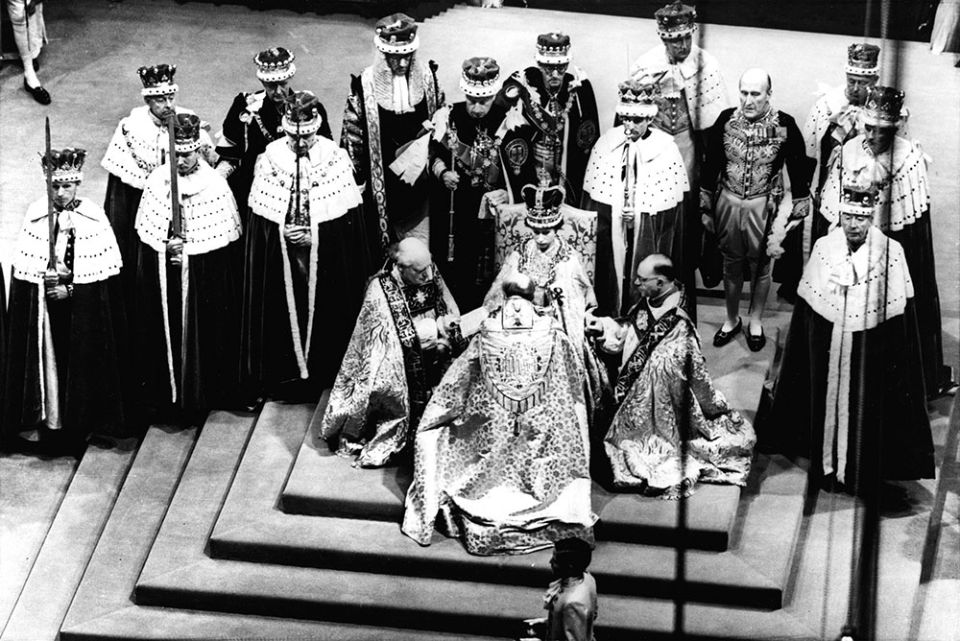 On June 2, 1953, Britain’s Queen Elizabeth II, seated on the throne, receives the fealty of the Church of England’s archbishop of Canterbury, center with back to camera, the bishop of Durham, left and the bishop of Bath and Wells, during her coronation in Westminster Abbey in London. (AP/File)

Both Elizabeth’s titles — supreme governor of the Church of England and defender of the faith — have their origins in the 15th century. Defender of the faith was first bestowed on Henry VIII by a grateful pope when he defended the Catholic Church against Martin Luther. When Henry founded the Church of England and rejected the pope’s power, he held on to the title, and all monarchs have used it since.

Henry’s founding of the Church of England also led him to use the title supreme head, later amended to supreme governor by his daughter, Queen Elizabeth I. All monarchs have since been called supreme governor, a role that does not mean that they manage the church but engage with it, address its meetings called the General Synod, and listen to, warn, and guide its leader, the archbishop of Canterbury.

But Elizabeth II, more than any other monarch, has embodied the title defender of the faith. Each year of her reign, she has made a broadcast at Christmas, shown on television and broadcast on radio — a tradition started by her grandfather George V when the wireless first became popular, and continued by her father, George VI. Since the turn of the century, she made her message increasingly personal and explicit about her own faith.

The early Christmas Day broadcasts of Elizabeth II were more platitudinous but in 2000 came a marked change when she spoke of the millennium being the moment that marked the 2,000th anniversary of the birth of Jesus Christ, “who was destined to change the course of our history.”

She went on to speak very personally and frankly about her own faith: “For me, the teachings of Christ and my own personal accountability before God provide a framework in which I try to lead my life. I, like so many of you, have drawn great comfort in difficult times from Christ’s words and example.”

Elizabeth II was born in 1926, the daughter of the Duke and Duchess of York and the granddaughter of the reigning monarch, George V. His eldest son, David, succeeded to the throne on George V’s death in 1936. But his reign as Edward VIII lasted just 10 months when he abdicated over the refusal of the government and the Church of England to countenance the monarch marrying the American divorcée Wallis Simpson, thus going against church teaching regarding the indissolubility of marriage.

Divorce was to remain a neuralgic issue for the royal family, however, because of the monarch’s links with the Church of England, and causing Queen Elizabeth II difficulties regarding her sister Margaret’s desire to marry a divorcé in 1952 — which was thwarted — and later her son and heir Prince Charles’ divorce and remarriage.

After the abdication, Edward VIII was succeeded by his brother, George VI, and in 1947, to mark her 21st birthday, his daughter, the then Princess Elizabeth, made a public commitment, saying: “I declare before you all that my whole life whether it be long or short shall be devoted to your service. … God help me to make good my vow.”

Later that year she married a distant cousin, Prince Philip of Greece, who converted from the Greek Orthodox Church in which he had been raised to the Church of England in order to marry her. The prince, who had a deeply inquisitive mind, was fascinated by religion and as the years went by became a staunch supporter of his wife’s increasingly explicit remarks about her own personal faith. 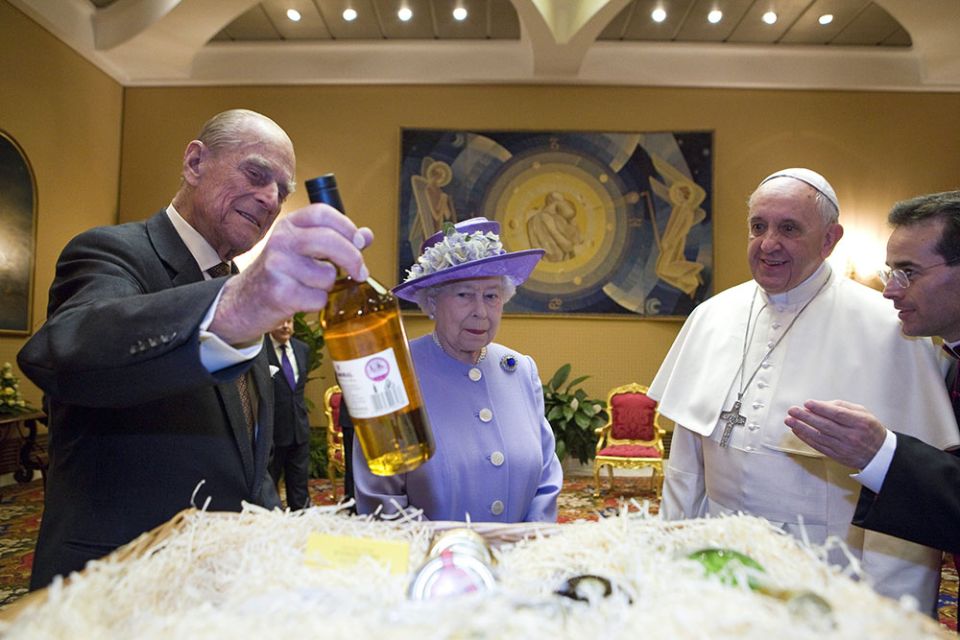 Elizabeth succeeded her father in 1952 and a year later was crowned in Westminster Abbey in an ancient coronation ceremony that can be traced back more than 1,000 years. It involves the anointing of the monarch who commits himself or herself to a life of service to God and the people through sacred promises. One of those, to uphold the Protestant religion, is also a reminder of Britain’s past religious divisions.

Throughout her reign, Elizabeth led the nation at regular services, to honor the war dead, or for thanksgiving for her jubilees. Each year at the traditional Maundy Thursday service, she distributed gifts to elderly people at an ancient royal ceremony established to imitate Christ serving his disciples by washing their feet and turn the spotlight on the monarch’s role of service.

Elizabeth was a regular Anglican church attender throughout her life and a keen Bible reader. She was said to have been on friendly terms with the American evangelist Billy Graham, whom she invited to preach for her on several occasions, although the close friendship the Netflix series “The Crown” suggested between them seems far-fetched.

Her husband, the late Duke of Edinburgh and her son, the now-King Charles, always displayed a more intellectual curiosity about religion than Elizabeth did. This led to great interest in both other Christian denominations and other faiths, something that Elizabeth grew to appreciate as Britain became increasingly diverse. She encouraged other faiths to be involved in the annual Commonwealth Day service held at Westminster Abbey and regularly met different faith leaders. 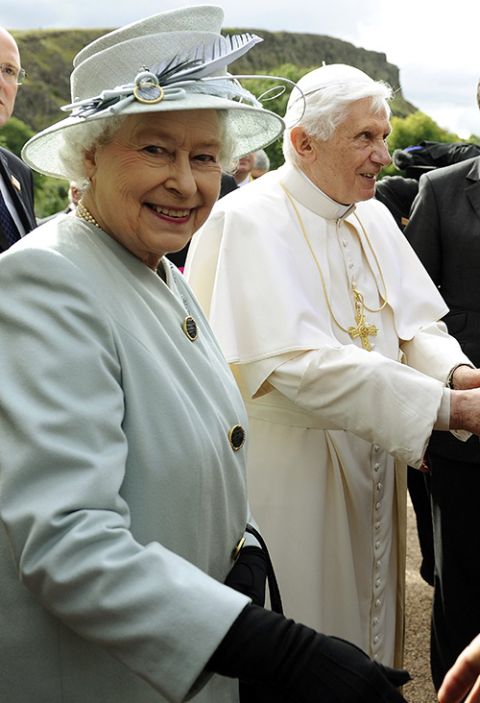 Queen Elizabeth II and Pope Benedict XVI walk through the gardens at the Royal Palace of Holyroodhouse in Edinburgh, Scotland, Sept. 16, 2010. (CNS/Reuters/Dylan Martinez)

In his citation for the queen’s Canterbury Cross, Welby commented on how “her subtle understanding of the changing position of the Established Church in England has sustained and encouraged laity and clergy alike.”

This understanding was most apparent in 2012, the year of her Diamond Jubilee, when she told faith leaders at an event in Lambeth Palace that the Church of England’s role “is not to defend Anglicanism to the exclusion of other religions” but that it “has a duty to protect the free practice of all faiths in this country.” At the time, it seemed to go mostly unnoticed, but it was a quiet rewriting about what the Church of England stood for.

Her Christian faith, one of her spiritual advisers told me, was the scaffolding of her life. Though she was supreme governor of the Church of England, it was Christianity, he said, rather than the Church of England, that was most important to her and she endeavored to lead the nation in being more tolerant of other denominations.

Elizabeth II was instrumental in improving relations between the Church of England and the Roman Catholic Church, making many visits to the Vatican to visit different popes and hosting both John Paul II in 1982 and Benedict XVI in 2010 on visits to Britain. No other British monarch, even before the Reformation, had ever done so and the papal visits to Britain and her personal welcome were a remarkable turnaround for a monarchy that once broke so spectacularly from Rome.

The regard for the queen was not just a question of respect for a head of state or for the titular head of a church; it was for her own personal faith. Mindful, though, of her coronation vow to uphold the Protestant religion, she never attended a Roman Catholic Mass, bar the 1993 requiem for her friend King Baudouin of the Belgians.

Just how much her Christian faith meant to Elizabeth II was revealed in a small book published to mark her 90th birthday in 2016. In a highly unusual move, she wrote the forward to the Bible Society publication, The Servant Queen and the King she serves, about her faith. She described how she remained “very grateful” to God “for his steadfast love,” and she wrote: “I have indeed seen His faithfulness.”

Catherine Pepinster is the author of Defenders of the Faith: The British Monarchy, Religion and the Next Coronation, published by Hodder and Stoughton.