The New Church of England General Synod contains what may well be a truly representative proportion of LGBT+Anglicans in its assembly. If 10% really is the estimate of the number of people in the British population whose gender/sexuality identity challenges the ‘binary norm’, then this latest gathering of the General Synod contains an average sampling of that sector of the population.

This is not to say that only 10% of Synod holds the more popular view that homosexuality is neither a ‘criminal offence’ nor a sinful distortion of the gift of sexuality – such as has been proclaimed by the Ghanain Anglican Bishops in their support of a bill in Ghana to criminalise homosexuals. It has been estimated that there is a significant number of other G.S. members who disagree with the stand of the Ghanaian bishops in their recent proclamation of support for state persecution of Gay people in Ghana.

The Archbishop of Canterbury has generated strong criticism from many members of the Church of England for his seemingly contradictory statements about his conversations with the Ghanaian bishops in the wake of their open support for a new law in Ghana, which would imprison people for being open about their non-binary sexual identity. This article from the British ‘Church Times’ describes the scene of silent opposition to the ABC’s handling of the situation, together with a record of the speech to Synod by the Prolocutor, Simon Butler, who identifies himself as being gay.

What does need to be understood in this situation is that, though the archbishop of Canterbury has no legal authority over other provincial Anglican Churches – outside of the Church of england – it has been thought that his positition as ‘Primus-inter-pares’ within the worldwide Anglican Communion, ought to have given the ABC a strong position of moral persuasion that would discourage all Anglicans around the world – including Ghana – from the promotion of homophobia and sexism, currently considered to be an outdated attitude of moral approbrium that Western society no longer tolerates.

A SILENT protest was held by LGBT members of the new General Synod on Tuesday, moments after the Archbishop of Canterbury attempted to draw a line under the row sparked by his conversations with the Anglican Church in Ghana regarding the proposed criminalisation of the LGBTQ+ community there.

Speaking during the opening session of the new quinquennium on Tuesday afternoon, Archbishop Welby reiterated his strong opposition to the Promotion of Proper Human Sexual Rights and Ghanaian Family Values Bill 2021 (News, 29 October). The Bill, which has been backed by Ghanaian clergy, imposes a maximum of five years in prison for someone identifying as LGBTQ+ and makes advocating LGBTQ+ rights a crime punishable by up to ten years in prison (News, 15 October).

Last Friday, Archbishop Welby apologised for not having spoken directly to Ghanaian clergy before releasing his initial statement condemning the Bill (News, 19 November) — a move that was criticised in the UK.

He told the Synod: “As I said in my first statement, which still stands, homophobia, including the criminalisation of LGBTQ+ people, is always wrong in any context.” This was reinforced, he said, by the 1998 Lambeth Conference’s Resolution 1.10 and by the communiqués of numerous Primates’ Meetings since. He also said that the Anglican Church in Ghana did not, contrary to reports, endorse the proposed criminalisation of the LGBTQ+ community in the Ghanaian Bill, although it maintained its opposition to same-sex marriage. 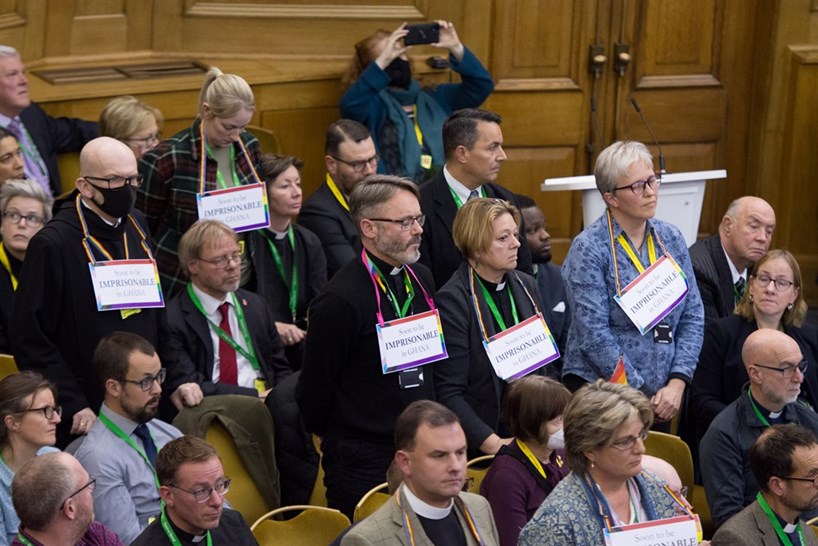 Archbishop Welby said that he continued to pray both for people who suffered among the LGBTQ+ community and “all those who suffer also from the ongoing effects of colonialism and imbalances of global power”.

In an apparent rebuke of the people who had criticised his engagement with the Ghanaian bishops, however, Archbishop Welby insisted that these conversations and his subsequent statement of apology had been vital as an “instrument of communion” and focus for unity within the Anglican Communion.

His assurances, however, did not forestall a protest minutes later by dozens of LGBT members of the Synod.

Speaking immediately after the Archbishop, the Prolocutor for Canterbury, Canon Simon Butler, said that it was important for everyone to “think very carefully about the messages we deliver”. Gay Anglicans in England, like himself, suffered alongside their LGBT brothers and sisters in Ghana, and, as such, he said that they wished to make a quiet statement of witness.

At this, dozens of Synod members stood, holding rainbow flags and wearing signs that read: “Soon to be imprisonable in Ghana.”

Canon Butler said: “This is just a simple gesture to remind us this is about real lives. At least ten per cent of this Synod are LGBTQ+. These coming years will determine if we are equal members or merely tolerated.”

Several members of the Synod raised the issue again during Questions on Tuesday evening. Archbishop Welby refused to offer any further comment, however, except to repeat that the House of Bishops had no jurisdiction over the Church of Ghana, and that, when making statements of any kind, he considered carefully the impact on persecuted Christians around the world.30