Theatre and ministry: Leaps of faith in a creative life

Throughout his 65-year career, James Roose-Evans has merged theatre and spirituality. Interview by Susan Gray 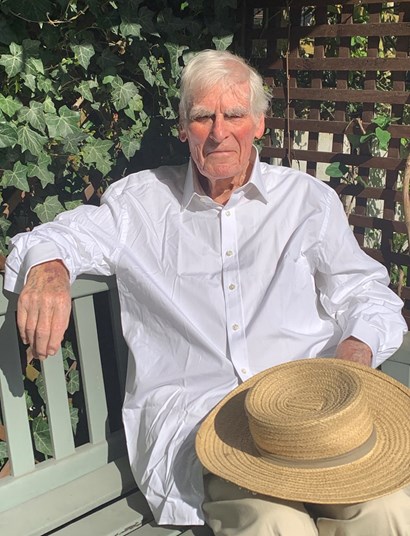 FROM his artwork-filled Belsize Park garden flat, 94-year-old James Roose-Evans directs an informal company of players, comprising former archbishops, magazine editors, national-treasure broadcasters, actors, and nuns. On parting, I will be tasked with taking two packages of books to the postbox, one destined for a nun who has lost her faith, and whose friendship with Roose-Evans is conducted purely by letter.

But, for now, I am sitting on his dusky pink sofa, a year after he received the Dunstan Award for Prayer and the Religious Life from Lambeth Palace for his distinctive contribution in exploring, over 65 years, the relationship between art and life, the creative and the spiritual. “Unlike an OBE, it touched upon the centre of my life, the perfect balance of the arts and the spiritual life.”

His unconventional theatre career and “hidden ministry” as a priest in the Church of England, defies the easy categorisation that propels names on to the New Year or Birthday Honours lists.

“I’ve said I’ll never get it. If I’d just stuck to the theatre . . . but they say ‘Who is this man? He does this, he does that? Is he a jack of all trades?’ But I’ve been true to what’s been given to me in my life.” Roose-Evans is also omitted from the online roll call of St Benet’s Hall’s notable alumni.

Surveying the prodigious theatre output running parallel to the immersion in religious life, it is not hard to sympathise with the gong-givers’ bewilderment over which aspect to single out. After directing stints at theatres in Norwich and Coventry, Roose-Evans founded the Hampstead Theatre in 1959.

“One of my favourite phrases which I’ve had calligraphed in my lodger’s room is ‘Leap and the net will appear.’ Well, it doesn’t always appear; but most of my life has been guided by that principle.

“I’d been directing at the Belgrade Theatre, Coventry, and a fellow actor said ‘Why don’t you start a theatre in Hampstead?’ I said ‘Where?’ He said ‘The church hall.’ And the next day, I went to see the vicar and booked it for a series through the whole year.

“The next week, the Ham and High front page was ‘Hampstead Has Playhouse’. And, for the first ten years, we lurched from financial crisis to crisis. There were no grants, but we survived and became very well known. It was a leap in the dark.”

Highlights of his time at the Hampstead include staging Harold Pinter’s The Birthday Party and The Dumb Waiter, premièring Tennessee Williams’s The Two-Character Play, and bringing Noël Coward’s writing back into performance with a production of Private Lives. A photo of Roose-Evans and the elegantly suited Coward, complete with tie clip and pocket square, attending a special matinée performance of Private Lives, occupies a side table.

TO GIVE a sense of how spirituality and theatre merge, Roose-Evans hands me a black-and-white photo dominated by a jangle of large sticks. “I went to Athens in 1972 to direct a production of Oedipus, and there was the moment when all the cast had poles, and they laid their burdens on Oedipus.

“There he is, struggling with the burdens of the people, trying to resolve them into a whole. The journey of Oedipus is the journey of all of us. We have to learn to integrate all our opposites, all the problems that people project on to us.”

Does he feel that priests are beasts of burden for their parishioners? “A true priest — and there aren’t many true priests around — should be able to carry other people’s burdens, not just their own.

“The sad thing is that, particularly in the Anglican Church, too many clergy are weighed down by having to raise money for maintenance of two or three buildings — the heating — for smaller congregations. So a lot of energy is being wasted in the wrong way. The priest should be there for the spiritual needs of the people in his or her flock.”

His own journey to the priesthood was, in the words of his ordaining bishop, John Eastaugh, Bishop of Hereford, “a one-off”. Roose-Evans had formerly been received into the Roman Catholic Church in Trieste, during his final months of National Service, the priest asking “E conento, adesso?” (Are you at peace?) after his first communion. “Those years as a Catholic were very important to me, and remain so.

Foundations for the road to Rome were laid in his violent Gloucestershire childhood. His father, Jack, would come home drunk and vomit on each step of the stairs. His mother, Primrose, would emerge from marital arguments in a ripped dress. Extreme violence for which there was no restitution also marked his schooldays.

A local First World War veteran provided spiritual solace. “I knew even then that I would become a Catholic. It was because of Jimmy Prosser.”

Prosser, a devout Roman Catholic, displayed fortitude in the face of horrific war wounds, treated through suspension in a leather-and-plaster casing, to fuse together his shattered limbs and spine. But he was so grateful to God to be alive that he went to Lourdes every year and drank holy water mixed with sick pilgrims’ pus. 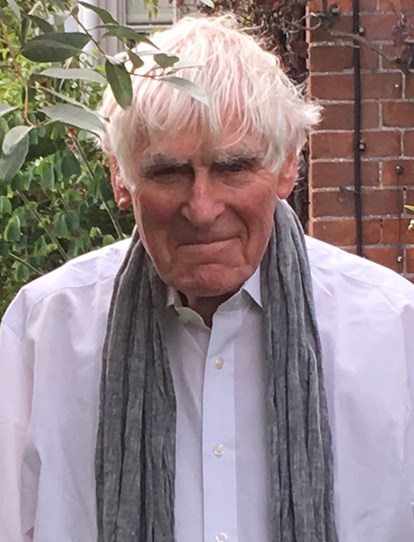 THE return journey across the Tiber is less linear than the initial crossing. Roose-Evans moved out of St Benet’s Hall, where he was the only lay student, to be with his first love, the Oxford Playhouse actor David March.

In the 30 years between leaving Oxford and being ordained in Hereford Cathedral on St David’s Day 1981, the director formed a close relationship with the Anglican Franciscan community at Glasshampton, in Worcestershire. “My years of meditating for all this, my years of Jungian analysis, which went very deep, and the year at Glasshampton in silent prayer — that was my preparation. I didn’t need the conventional one.”

The idea for a “hidden ministry” came in a dream, and he had been warned by his analyst not to go to theological college, for fear of being brainwashed. In the early 1970s, the Church of England began officially accepting non-stipendiary ministers, and this overlapped in 1973 with Roose-Evans’s directing the Chester Mystery plays.

In his treatment of the cycle, a tall tree stump stood for both the Garden of Eden and the crucifix. “The experience of the Chester Miracle Plays was very profound,” he says.

He invites me to look at his study, at the end of a path curving through rose beds. Near the door is an icon of Christ with foregrounded huge feet, pierced by a gigantic nail.

“The image particularly of his feet and hands being nailed — he would have screamed and screamed with pain. And there’s his mother standing at the foot of the cross: the silence of Mary haunts me, that she stood by him at the end.

“And then no wonder comes this cry ‘My God, why have you forsaken me?’ The sheer despair of pain. But the key words are ‘It is finished.’ Before, he had said, ‘I have done the work that thou hast given me to do.’

“That’s the work for all of us: to end our lives and be able to say, ‘I have done the work that hast given me to do.’ For each one of us, that’s the challenge: not to waste our lives. Sadly, so many of us do — tragically, sometimes.”

AFTER ordination, Roose-Evans’s best-known work, 84 Charing Cross Road, “erupted in the West End”. His adaptation of Helen Hanff’s epistolary work about her correspondence with a London bookseller gave the American writer financial security for the first time in her life.

Later in the 1980s, another play centred on friendship sustained through letters, The Best of Friends — about the correspondence between Dame Laurentia MacLachlan, Abbess of Stanbrook, George Bernard Shaw, and Sidney Cockerell — brought John Gielgud back to the stage.

As a teenager, Roose-Evans had stayed at Stanbrook in the time of the real Dame Laurentia: “I prefer the term synchronicity, which comes from the East, to Providence.”

He is quite clear that he never used his professional success to influence his potential theatrical flock. “My job was direct them in the play, not to preach at them or tell them to go to church.”

Critical of the Church’s continuing attachment to big buildings for small congregations, Roose-Evans also has sharp words for microphone mumblers, under-rehearsed readers, and celebrants who gallop through the mass.

“A lot of what happens in Anglican and Catholic churches is bad theatre. I remember going to a mass at Westminster Cathedral for Pope John Paul II when he died. It was packed; people were standing, and you couldn’t hear a word a priest was saying.”

His solution is to take the Early Church as a model and meet in one another’s houses. But he also admits that sitting hugger-mugger is not every Anglican’s cup of tea. “It would be much better in a smaller space, a more intimate space. When I was a curate in Herefordshire, work had to be done on the church; so everybody gathered for the eucharist in a small hall.

Counter-balancing the need for connection, intimacy, and communion is the centrality of silence, memorably experienced at Glasshampton. “I learnt so much from our silence. And the pressure on Jesus, the crowds wanting to hear him, wanting to be touched by him — the need to go off at intervals to a lonely place is very important. This is why meditation every day is important.

“The spiritual life is the whole centre of my being, and throughout the night I often say my mantra ‘God is present. God is here. God is now.’ But I don’t feel the need any more to go to church. But that’s just my personal journey. I wouldn’t impose it on anyone else.”

Having, myself. enjoyed the life of an actor – and being of a similar age to the subject of this C.T. article – I was struck by the familiar coinherence of James Roose-Evans‘ story with my own experience as both Anglican priest and theatre buff.

However, when one consider the drama inherent in the Christian Liturgy (especially for an Anglo-Catholic like me) the life of James seems quite consistent with what an ardent theatre-lover might experience in the course of a life also committed to the spirituality of the priesthood.

Having once taken a role as the Confessor of Joan of Arc in George Bernard Shaw’s ‘St.Joan’, followed later on by playing the Confessor of Martin Luther in John Osborne’s ‘Luther’ I have long been used to the dramatic influence of the priestly role in both drama and the Church.

After retirement as an Anglican parish priest in New Zealand, I actually played – in the popular NZTV drama ‘Xena, Warrior Princess’ – the role of the pagan priest ‘Galen’ (an historical character whose pharmaceutical skills are recognised in today’s pharmacies as ‘Galenicals’) a character who – though described as ‘pagan’ – was yet considered a religious figure of his day.

As an actor – like James – I have always been keen to ensure that the other ‘actors’ in liturgical worship, especially where clear diction is required, be offered training in voice production, so that the meaning of Scripture and the Liturgy can be cleanly discerned by the listeners. This ministry, often carried out by lay people, is a vital contribution to a listening congregation’s understanding and appreciation of the Faith of the Church. The word ‘liturgy’ means ‘work’ – a particular activity requiring intelligence and sensitivity – in this case, dedicated to the glory of God.