Our Lent series is from a new book exploring the Lord’s Prayer. In the first extract, Stephen Cherry considers what we mean by ‘Our Father’ 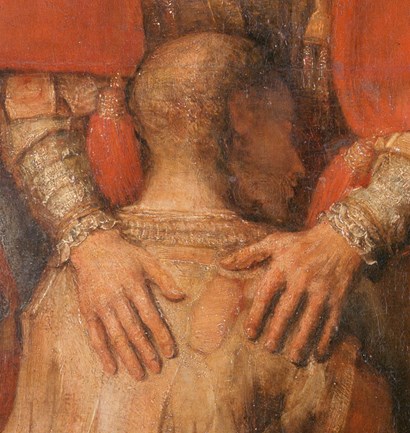 Detail from The Return of the Prodigal Son by Rembrandt van Rijn (c.1668)

THE question of how to begin a prayer confronts everyone who has ever sought to pray. Jesus was a person of prayer long before he taught his disciples to pray, and we can be sure that as he prayed he drew on the prayers of the Bible — not least the great collection of poetic biblical prayers called the Psalms. We might expect, therefore, that when Jesus did teach his disciples to pray, he would have put forward a familiar image or idea from that basic repertoire of prayer. The surprise is that he did not. The word with which the prayer begins is not “Judge”, or “Lord”, or “Master”, or “Mighty One”, or even “Almighty”, but “Father”.

It would be wrong to imagine that Jesus was here inviting people to think of their own relationship with their male parent and then extend that to their relationship with God. There is no evidence that he had a particularly high regard for his earthly father, and he certainly took the opportunity from time to time to distance himself from the idea that the domestic or genetic unit was especially important (Matthew 12.48-50). For Jesus and his Jewish followers, the duty to respect parents, and to care for them when they became needy, was enshrined in the Commandment: “Honour thy father and thy mother.” But, for Jesus, our duty of care is far more extensive than an exclusive focus on the family.

WHEN Jesus used the word “Father” as the mode of address with which to begin this prayer, he was shifting the focus of our relationship with God from one based on power and deference to one based on care and support. When we pray to the “Father”, we pray to the one who caused us to be and sustains us in life, not to one who owns us as a subject, or who has power over us that we fear will be exercised harshly, or who matters primarily because it is by them that we are held to account for our thoughts, words, and deeds. The “Father” whom Jesus addresses is not a potentate who terrifies, but a progenitor who is deeply benevolent.Advertisement

It’s also important to appreciate that, when Jesus used the word that we translate as “Father”, he was not making a definitive statement to the effect that God is more like your father than any other person you can think of or imagine. Nor was he saying that your earthly father is the best model of God that can ever be suggested. And he was certainly not saying that “your father is more important than your mother.” On the contrary, he was deliberately moving people’s understanding of God from the institutional to the relational.

THAT, as time has gone by, it is the father of the household who has been taken to embody and represent a more formal, discipline-oriented figure than has the mother is, given Jesus’s choice of words, the source of significant confusion. The biblical scholar Joachim Jeremias understood this point well and addressed it by writing that “the word ‘Father’, as applied to God, thus encompasses, from earliest times, something of what the word ‘Mother’ signifies among us.”

Writing much more recently, the Jesuit priest and leading Roman Catholic theologian Gerald O’Collins — seeking to capture here the sense of forgiveness seen in the father of the prodigal son, in Jesus’s compassion for the large hungry crowd that gathered to hear him, and in his uses of the imagery of a mother hen caring for her chicks under her wings to describe his mission — suggested that the God to whom Jesus prays might be thought of as a “motherly father”.

THE origin of the bird and wings imagery is found in the Old Testament, but, according to O’Collins, not only did Jesus apply to himself imagery used for God but he also “gave the image a very homely twist by representing himself not as a mighty eagle but as a barnyard hen”. O’Collins goes on to expound the “motherly father” phrase in terms of the way in which the death and resurrection is presented by the Evangelists and, in particular, by a sequence in the Gospel of John. It is John who uses the metaphor of childbirth to explain the paroxysm of pain and lamentation that accompanies the birthing of a new way and how it is all swallowed by joy.

It is John, too, who names the women who stand as silent witnesses to the crucifixion, and Mary Magdalene as the bewildered and distressed witness to the resurrection. O’Collins sees this as a “feminine sequence” that has a deeper symbolic meaning — one perhaps not evident to the writer. “It may prove hard to catch this meaning in a net of words, but we should not bypass the task of reflecting on the feminine face of Jesus’ death, burial and resurrection — a face which also lets us glimpse some characteristics of the God whom Jesus preached and revealed.”Advertisement

THE figure of Mary, the mother of Jesus, not only runs through this narrative — and indeed the whole Gospel narrative right up to and including Pentecost — but also hovers over it as the Virgin Mary or “Our Lady”. Oddly, “Our Lady” is not often connected to the “Our Father”, but might it be that there is in the deep spirituality of this prayer an integration of two principles that Christianity has done well to retain, but perhaps done too much to hold apart?

Carl Jung, one of the founders of psychoanalysis and the unwitting progenitor of the Myers-Briggs personality-testing industry, believed that the doctrine of the Assumption of Mary was “the most important religious event since the Reformation” because it signified that the feminine principle had been absorbed into the Godhead.

Certainly, those who meditate on or pray with Andrei Rublev’s great 15th-century icon of the Trinity, based on the hospitality of Abraham, will be struck by the feminine nature of the forms and the androgyny of the faces. There can be no doubt that, had Rublev wanted to depict God as a bearded man, he would have had the resources to do so — and countless examples to follow. But he didn’t.

ANOTHER image that points to the way in which masculine and feminine principles are held together in the divine, as Henri Nouwen observed, is found in the different forms of the two hands of the forgiving father in Rembrandt’s masterpiece The Return of the Prodigal. These two images are today reproduced thousands, if not millions, of times each year. Maybe part of their power is that they communicate something integrating and healthy and complete about the understanding of God’s nature and of God’s relationship with us.

There are many people for whom that health and fullness is no longer conveyed by the word “father” alone, while for others the word is still able to do its spiritual work of connecting muddled human beings with the God of comprehensive and all-encompassing love. Whatever we say, however, when we use the word “father” here we are implying “mother” and referring to the lovingkindness of God.

The Revd Dr Stephen Cherry is the Dean of King’s College, Cambridge.

This timely article from the U.K. Church Times helps us to better understand the statement of Mother Julian of Norwich, who was prone to address the Creator as ‘Mother-Father God’

When Jesus composed the ‘Lord’s Prayer’ for us by his followers. the word ‘Father’ perhaps ought to be best understood by the use of the Aramaic familiar ‘Abba’, which – in Jesus interpretation (considering his own use of the term ‘mother hen’ to represent his own eirenic ministry) – may well have been an amalgam of the caring aspects of both male and female gender.