TRUMP and his abortive collusion with the Religious Right

Now that it’s essentially an arm of the Republican Party, the religious right may have a hard time keeping younger believers & recruiting new members to their politicized churches.Commentary by John Gallagher Sunday, December 20, 2020 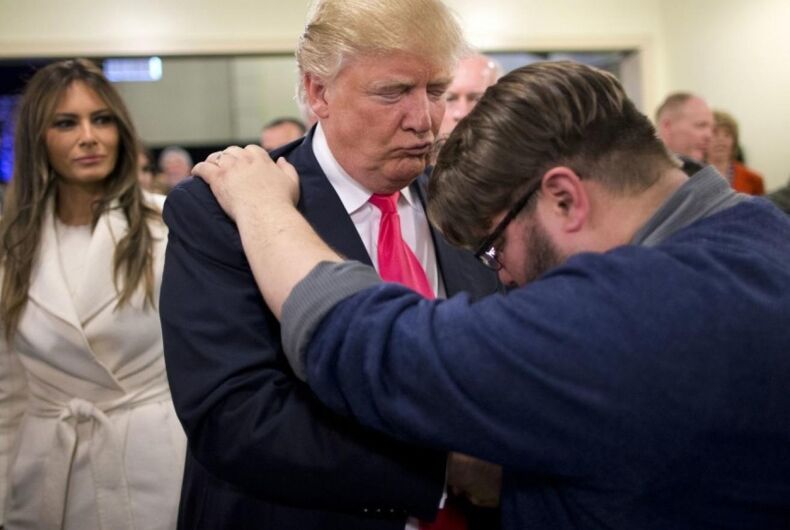 Without question, the folks who are sorriest to see Donald Trump leave the White House (aside from the grifters in the president’s orbit) are conservative evangelicals.

If you worship at the same altar of transactional politics that Trump does, the affinity between the president and the religious right makes perfect sense. Trump gave conservative Christians practically everything they wanted. He stacked the courts — especially the Supreme Court — with judges sympathetic to the religious right, who will side with their grievances for decades to come. He loaded his administration with religious right fanboys, starting with his choice for vice president, Mike Pence.

The hypocrisy speaks for itself. But what the religious right never seemed to reckon with was the cost of supporting Trump. That may be a lot higher than they thought.

It’s not just that the Biden administration will be a lot less open to pleasing conservative Christians. The incoming president is not the kind who will punish his political opponents, even when he disagrees with them. (If he did, Kamala Harris wouldn’t have been his choice for a running mate.)

No, the cost is likely to be reflected in numbers. The number of people in the US who identify as evangelicals has been shrinking for years. While the numbers vary depending on who is doing the surveying, the fact remains that the number of Americans who profess to be Christians is on the decline. While the mainstream Protestant denominations and Catholicism have taken the biggest hits, evangelicals haven’t been entirely immune.

Like many church goers, evangelicals tend to be older and whiter than the rest of the population. Moreover, younger evangelicals, while still relatively conservative, are much more moderate than their elders when it comes to issues like climate change or LGBTQ rights.

By aligning themselves so closely with Trump and becoming synonymous with his political base, conservative evangelicals made their movement effectively a wing of the Republican Party. If you want to grow your numbers, or at least slow the decline, becoming so highly politicized and divisive is not the best strategy. It makes it harder to recruit.

Moreover, being overtly partisan doesn’t help retain younger evangelicals. Some young believers have been struggling with the rightward political drift of their churches. The New York Times got 1,500 responses from young evangelicals for a 2018 story, and many questioned the close ties between their faith and the GOP, with some saying it had caused schisms in their families.

The scandal surrounding evangelical leader Jerry Falwell Jr., his wife and the young man involved in their sexual shenanigans didn’t burnish the movement’s reputation with younger evangelicals either.

The religious right has been fighting so hard because it’s convinced its way of life is disappearing. Trump may have been their last chance to turn back the clock, but no matter how hard they fight, conservative evangelicals can’t stop the demographic and attitude changes working through the American population.

The more the evangelical movement is seen as an attempt to hinder progress, the less its chances for success or growth. They can either adapt to reality or deny it. With Trump, they chose the latter, and for that they’ll pay a price.

The picture at the top of this page show POTUS Donald Trump with his eyes closed. This well now be his ruling motif for his government during this time at the White House. Certainly, he is not doing much for the good of the United States during this time of transition to Democratic rule under President-elect Joe Biden (a practising Catholic).

Trump probably now feels the need of prayer for his translation to ‘Life After’ the four years of his presidency. By all acounts, he is spending more time on the golf course than in the Oval Office in this time of the COVID Pandemic, which is still raging all over the U.S. – despite the arrival of the new vaccines that his administration is slowly filtering into the public sphere.

His main supporters in the now bygone Election for POTUS were the conservative Evangelical Christians whom he courted assiduously during the recent lead-up to the Presidential Election which, however, he lost to the Democratic Party – more by what he did not do for the nation, rather than by any positive good that might have gained him other support during his presidency.

With the arrival of Joe Biden (who has his own detractors among some of the Roman Catholic hierarchy, whose conservatism has looked askance at Joe’s more liberal position on abortion and the LGBTQI community), America will once again become the more liberated, open and inclusive country that its Founders first envisaged for those immigrants who would help American to become the most democratic country in the world. The looked-forward-to emancipation of the Black community, immigrants, and LGBTQ+ people in the United States can now be advanced under Democratic rule.

As further evidenceof Trump’s defeat – despite his support from the Con/Evo community in the U.S. – here is the latest news of a statement of Evangelical Leader, Pat Robinson, sealing Trump’s demise:

Rev. Pat Robertson, a fixture of right-wing evangelical commentary and one of President Donald Trump’s longtime supporters, declared that Joe Biden will be president and urged Trump to accept that fact.

The outgoing president, said Robertson, “lives in an alternate reality” and “is very erratic,” in footage posted by Right Wing Watch. Robertson said to Trump, “You’ve had your day and it’s time to move on” — and added that Trump should not try to run again in 2024, something he has been reportedly considering.

Trump won overwhelming majorities of white evangelical voters both times he ran for president. They have been a reliable component of his coalition and critical to the GOP’s viability in elections.

This is a picture of Pat Robertson, making his concession speech to the former President