Jerry Prevo started “a bitter and sometimes violent battle over LGBT rights” in the 1970s in the state of Alaska that continues today. 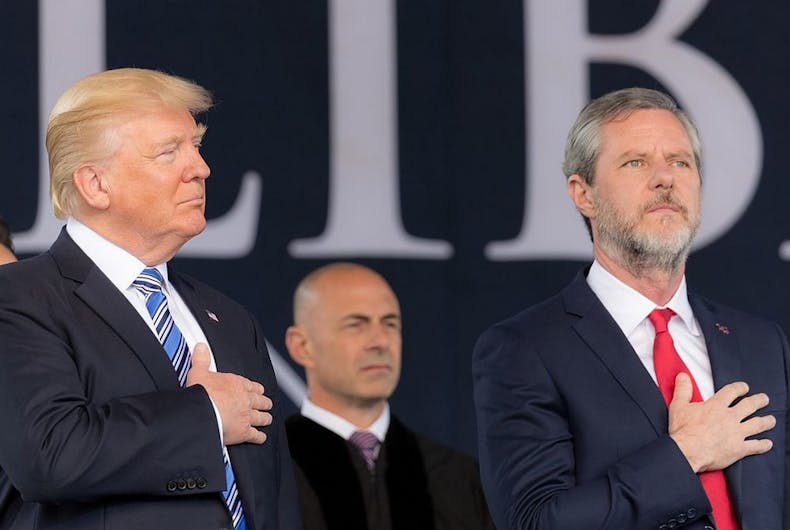 Liberty University has announced that its president, Jerry Falwell Jr., will be replaced this year by pastor and anti-LGBTQ activist Jerry Prevo.

After several high profile scandals involving both his workplace conduct and his private life, Falwell announced that he’ll be taking an indefinite leave of absence from leading the prominent evangelical university that his father founded.

“Please pray for us as well as the Falwell family as we embark on our academic year and so we may continue to be united in our common purpose and our faith in Christ,” said Prevo in the statement from the university announcing his appointment as acting president.

While Prevo just retired as head pastor at the Anchorage Baptist Temple – far from Liberty University in Lynchburg, Virginia – he is the current chairman of Liberty’s board of trustees. Prevo, though, has a lot in common with the founder of Liberty University, the late anti-LGBTQ extremist Jerry Falwell, Sr. According to Charles Wohlforth at the Alaska Daily News, Prevo started “a bitter and sometimes violent battle over LGBT rights” in the 1970s in the state of Alaska.

In 1978, Prevo and a group of pastors created an organization to oppose Dave Rose’s candidate for mayor of Anchorage. According to one website that follows Alaska politics, Rose drew their ire because, when he was on the city’s assembly, he supported an ordinance that outlawed discrimination on the basis of sexual orientation.

“As a teenager, I saw Prevo destroy the political career of mayoral candidate Dave Rose, our family friend, with false insinuations he was gay,” said Wohlforth, who also recalled the event. That was just the beginning of Prevo’s involvement in politics. He was already the head of what would become the largest congregation in the state.

In 1980, Prevo founded the Alaska chapter of the Moral Majority, a powerful Christian conservative organization that was co-founded by Falwell Sr. The group helped elect Republicans across the country in the 1980s to push “family values,” which was their term for opposition to abortion and other measures that protect women’s equality, opposition to LGBTQ equality, and promoting religion in schools and other public spaces.

Prevo helped the group elect Republicans in Alaska and gained access to powerful people himself. He claims to have met every president since Jimmy Carter, except for Barack Obama. Even though LGBTQ rights have advanced since Prevo got involved in politics, he blames a lack of education about the Bible. “Young people these days, I don’t think they know what God says about” homosexuality, Prevo said last year. “Therefore, they are endorsing it.”

But his activism has continued. His church in 2012 ran transphobic ads to oppose a measure that would add sexual orientation and gender identity to the Anchorage Equal Rights Initiative. One of the ads showed a drawing of a balding, hairy, muscular woman going into the women’s locker room at a gym while a bystander looked shocked, relying on negative stereotypes of transgender women to oppose LGBTQ equality. The other ad claimed that a hypothetical daycare center would be forced to hire “a transvestite who wants to work with toddlers,” implying that LGBTQ people are a threat to children.

In 2013, Prevo’s church kicked out a Boy Scout troop after the organization ended its long-standing ban on gay youth. “No homosexual will enter the Kingdom of God,” Prevo said to explain why the church was distancing itself from the scouts.

The group Save 71, created by Liberty University alumni, is opposed to Prevo’s appointment, saying that he’s one of Falwell Jr’s “greatest enablers” when it comes to the alleged toxic workplace culture at Liberty University

For years, Falwell Jr. has been accused of improperly using school and personal funds to help muscular young men with business projects, making inappropriate comments about students (like calling one “retarded”) and to subordinates (like showing them racy pictures of his wife and bragging about the size of his genitals), and partying at nightclubs – Liberty bans students of all ages from drinking alcohol, hanging out with the opposite sex after dark, and “social dancing.”

But the scandals apparently got to be too much for the university this past week, when Falwell Jr. posted a picture of himself with a woman who is not his wife and both of their pants were open while he held a drink (he claimed it was nonalcoholic). He later apologized for posting the picture in a slurred interview with a morning radio show and promised to be a “good boy.”

Even a member of Congress called for Falwell Jr to resign.

Falwell Jr also opened Liberty this past spring as colleges around the world closed due to the coronavirus pandemic. When the New York Times reported on several students who may have caught the virus at the school, Falwell filed a lawsuit against the newspaper for $10 million, claiming that a journalist who talked to students was trespassing on campus.

But Prevo’s appointment is “not a comforting sign,” 2018 Liberty graduate Dustin Wahl told the Washington Post, adding that Prevo “is not in touch with the situation at Liberty. The Board does not have interest in turning the page on the years of Falwell’s amoral and catastrophic leadership.”

One of Donald Trump’s greatest supporters, Gerry Falwell Jr., has recently been sacked by fundamentalist ‘Liberty University’ board, for unseemly conduct, ill-befitting the position he held as the University’s President.

Pictured in this article standing alongside the POTUS, Falwell has been one of his most avid supporters for the repeal of human rights of U.S. citizens, whose needs for justice were being met by the previous Democratic government under President Obama. This latest scandal attaching to the head of Liberty University can do nothing for the reputation of the University, nor for its ‘moral majority’ reputation in the United States.

However, the new appointment of another fundamentalist anti-gay Protestant pastor, Baptist leader Jerry Prevo – of this curiously-named ‘Liberty’ University (for whom the cachet ‘liberty’ gives the freedom to protest against other people’s freedom to be who they are intrinsically) – gives Donald Trump the sort of faux-Christian backing he needs to secure the votes of the notorious ‘Religious Right’ group in the United States, whose aim isto consolidate the authoritarian reign of Donald Trump as President at the next U.S. Election.

Whether Trump’s claim to represent U.S. Christians will succeed or not, depends, largely, on the willingness of the American people to any longer be seduced by Trump’s chronic inability to manage his country’s social and economic situation under the current conditions being imposed by the depredations of COVID 19 in the U.S.A. His shaky hold on any credibility with the country’s Moral Majority’ must surely also affect his chances of re-election to the country’s highest office.

Trump’s playboy background – together with his tactical ineptitude on matters of public concern – have not earned too many brownie points with the population of America at large. His authoritarian attitude towards the common human rights of all Americans has not won him any friends amongst the LGBT+ or the African/Mexican/American communities either. His diplomatic skills have been proved singularly lacking in understanding amongst world leaders – to the extent that his continuing bluster is no longer being taken seriously by them.