But as Graham regularly does, he distorts the actual truth. Imagine that. 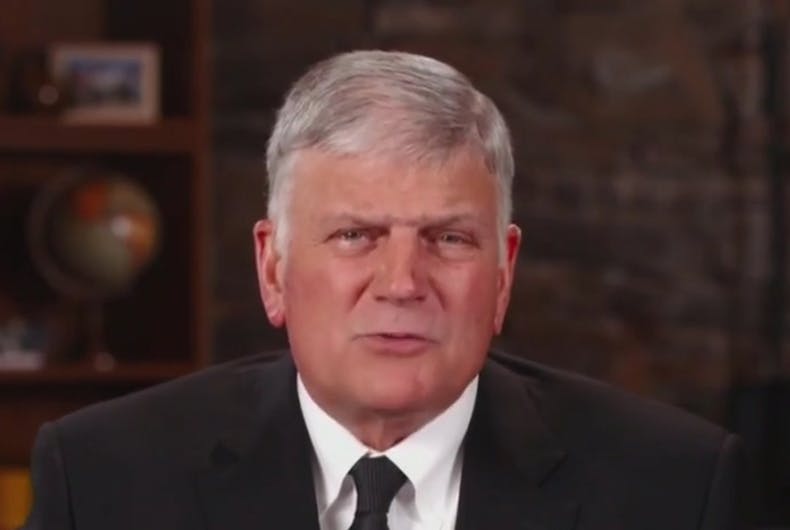 Evangelical leader and fervent Trump worshipper Franklin Graham has taken to Facebook to denounce Anthony Fauci, the director of the National Institute of Allergy and Infectious Diseases, for speaking about the anti-science bias that has been fomenting on the right for years now.

“Science isn’t truth. God is,” the conservative mouthpiece declared. Graham, the son of the famous evangelical preacher Billy Graham, is not actually a minister.

After he was asked why so many people had taken issue with coronavirus precautions during a podcast, Fauci pointed to the religious right’s attacks on scientific facts, anti-vaccination types, and Donald Trump supporter’s distrust of authority figures.

“One of the problems we face in the United States is that unfortunately, there is a combination of an anti-science bias that people are – for reasons that sometimes are, you know, inconceivable and not understandable – they just don’t believe science and they don’t believe authority,” Fauci said.

“So when they see someone up in the White House, which has an air of authority to it, who’s talking about science, that there are some people who just don’t believe that — and that’s unfortunate because, you know, science is truth.”

“It’s amazing sometimes the denial there is. It’s the same thing that gets people who are anti-vaxxers, who don’t want people to get vaccinated, even though the data clearly indicate the safety of vaccines,” Fauci added. “That’s really a problem.”

From evolution to COVID, Graham took exception to Fauci’s statement.

“This week Dr. Anthony Fauci made the statement that ‘science is truth.’ Really? I would beg to differ. Science may be a quest for truth, but it is certainly fallible,” Graham posted. “I’m not against science of course, but we know that scientists often disagree.”

“As an example, the early Imperial College London coronavirus model has since proven wrong, and disputes continue today between the experts about the model used more recently in the U.S. And, man did not evolve from apes or tadpoles as many scientists say. That’s just not true—God created man and woman as the Bible says.”

Science, of course, is constantly evolving itself, as new facts emerge and theories are proven or discarded. Darwin’s theory of evolution treatise, On the Origin of Species, was written in 1859 and has been repeatedly proven by scientists worldwide.

“If America has an ‘anti-science bias’ as the doctor said in his interview, it might be because we aren’t sure whether to trust those who are presenting their science to us,” Graham continued. “Dr. Fauci first told the American people they didn’t need to wear facemasks, then reversed himself to say that we did. Then he revealed the reason that he had said that initially was because there was a shortage of facemasks! So, the facts changed to avoid a run on facemasks? That’s not a good step toward building trust.”

But as Graham regularly does, he distorts the actual truth of what Fauci said. Factcheck.org has flagged the claim, in fact, and notes that it is false.

In an interview with Dr. Jon LaPook, chief medical correspondent for CBS News, Fauci made it clear he wasn’t opposed to people wearing masks in public, but at the time there was a national shortage and nurses and doctors were making their own masks out of plastic and fabric while hoarders and people looking to make a quick buck bought up the supply of masks.

“The masks are important for someone who’s infected to prevent them from infecting someone else…. Right now in the United States, people should not be walking around with masks,” Fauci told LaPook as he explained that a mask wouldn’t prevent someone from catching the coronavirus. Instead, it would prevent someone who was already infected from spreading the disease further.

“But, when you think masks, you should think of health care providers needing them and people who are ill. The people who, when you look at the films of foreign countries and you see 85% of the people wearing masks — that’s fine, that’s fine. I’m not against it. If you want to do it, that’s fine.”

“But it can lead to a shortage of masks?” LaPook asked.

“Exactly, that’s the point. It could lead to a shortage of masks for the people who really need it,” Fauci responded.

While the CDC did not recommend masks as a coronavirus prevention measure at first, after knowledge of the virus expanded, the agency changed direction and suggested they be worn if social distancing wasn’t an option, noting the point “is to protect people around you if you are infected but do not have symptoms.”

This sad report from North America, concerning the questioning by Franklin Graham (son of former Evangelical Pastor, Billy Graham) of the Advice given by White House Advisor-in-chief, Anthony Fauci, on matters to do with the current Coronavirus pandemic sweeping the USA only serves to headline the faulty understanding of Graham and his idol, Donald Trump, of the seriousness of the situation.

For Graham to make the bald statement that: “SCIENCE ISN’T TRUTH; GOD IS” could be very misleading – as though God’s-Self were nothing to do with the Creation God brought into being. God, to thinking believers is, indeed, OMNISCIENT (All-Knowing), containing ALL TRUTH. But God is NOT the enemy of science.

Of course scientific endeavour does need the use of intelligence – something seemingly in short supply in the current White-House Administration. Sadly, it is ‘fundamentalist religious advisors’ like Frankling Graham that help to obscure the reality of what is going on in the most powerful nation in the world!