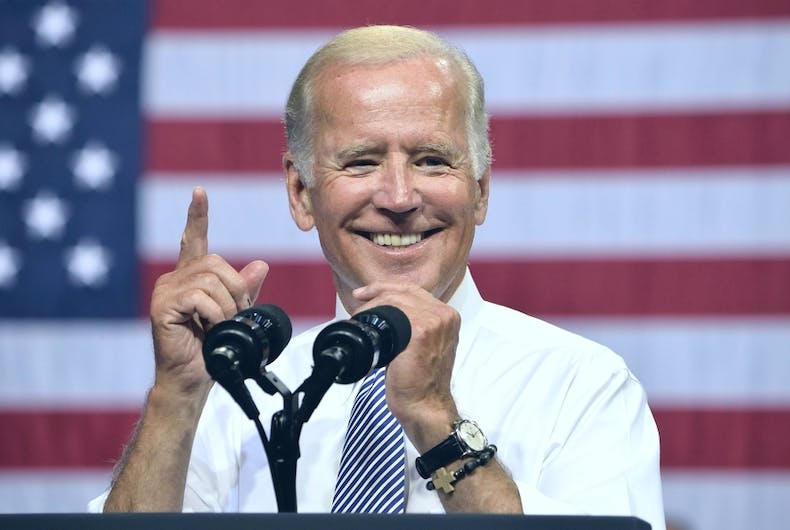 Their endorsement comes on the eighth anniversary of Biden’s historic 2012 Meet The Press interview in which he voiced support for marriage equality before President Barack Obama had.

HRC’s 26-member Board of Directors “unanimously and enthusiastically” voted to endorse Biden for president.

“Vice President Joe Biden is the leader our community and our country need at this moment,” said HRC President Alphonso David. “His dedication to advancing LGBTQ equality, even when it was unpopular to do so, has pushed our country and our movement forward.”

“This November, the stakes could not be higher,” David continued. “Donald Trump and Mike Pence have spent the last three and a half years rolling back and rescinding protections for LGBTQ people. Joe Biden will be a president who stands up for all of us.”

“Joe Biden is the advocate and president we need at this consequential moment,” Keisling wrote. “The Trump administration is really the discrimination administration. President Trump has attacked transgender health care, put transgender students unnecessarily at risk and led a consistent and unrelenting effort to roll back protections for LGBTQ Americans.”

Keisling continued, “Biden has a strong agenda for addressing the issues that face transgender Americans, a record of getting big ideas done during his time as Vice President in the Obama-Biden administration and a history of ensuring that transgender people are protected, including protections for transgender women as part of the reauthorization of the landmark Violence Against Women Act he authored.”

“With Joe Biden, we know we will be engaged, we will be seen, and we will not be erased,” Keisling concluded.

In 2012, Biden called trans rights the “civil rights issue of our time,” saying something few Democratic politicians or Obama administration members dared to. He also helped staff various administration positions with trans people, and assisted with the repeal of the military ban on LGBTQ service members.

This latest endorsement by two LGBT+ organisations in the USA helps to focus the attention of North Americans on the conversely repressive activity of Donald Trump’s presidency – that threatens their specific human rights if Trump is re-elected for a further term as President of the USA (POTUS).

Since Trump’s epic program of collusion with the American Religious Right, wherein he has teamed up, for instance, with the conservative Roman Catholic Cardinal Dolan and those of the US Catholic Bishops who want to make abortion illegal in the U.S., as well as openly campaigning against Same-Sex Marriage and other established rights of  America’s  Gay Community ( one of which is to enlist in that country’s armed services) – the country is in great danger of an extension of the current President’s ambition for more power in his presidential role. His autocratic appointment of conservative judges and governmental legal officers is now becoming a source of worry for those concerned for the American Justice system.

Trump’s open association, also, with Pentecostal Church Leaders – in association with whom, he has appointed a controversial team of Presidential  Religious Advisors to influence his colleagues from the White House – is another outstanding feature of his bid to use conservative Christian Leaders to support him at the next Presidential Election.

However, with Democratic Leadership now rallying behind Vice-President Joe Biden, it is eminently possible that Trump’s ambitions for the next Presidential term might yet be thwarted – a situation that must surely benefit the people of the United States as a whole. The United States was founded upon a principle of democratic freedom, quite contrary to the sort of presidential dictatorship that currently flourishes under the present incumbent.