Rector’s story of Recovery from COVID 19

Posted on April 15, 2020 by kiwianglo
The experience “has been really surreal for me,” Pace told Episcopal News Service. “It’s been quite a ride.”For Pace, the ride may have started at the CEEP Network’s annual conference in Louisville, Kentucky, in late February. At least six people who attended that conference, including Pace, later tested positive for COVID-19.But when Pace started feeling sick about a week after the conference and went to see his doctor, there were only a few reported cases of COVID-19 in the U.S., mostly in people traveling from China.

“He said, ‘Of course, COVID is starting around the world, is starting around the United States,’” Pace said, recounting the conversation with his doctor. “He says, ‘Well, have you been anywhere exotic?’ And I said, ‘Well, no, I’ve been to Kentucky!’ And we both just kind of laughed and said ‘Well, OK, let’s rule that out, then.’”

But a flu test came back negative, and Pace’s cough was worsening.

“It was this real deep cough that was just incessant,” Pace said. “And what I now understand but could not put a word to at the time – because I had never experienced it before – was the shortness of breath.”

Pace also had a low-grade fever. His doctor, assuming he had a common virus, sent him home to rest and said that, once the fever had been gone for two days, he would no longer be contagious and could get back to work. And for a brief period, that seemed to be the case. A few days later, although his cough persisted, the fever had gone, so he thought it would be OK to continue leading his scheduled Lenten series on the evening of March 4.

Pace gave a talk in front of about 45 people in the parish hall that evening, but stayed at the front of the room and didn’t shake anyone’s hand.

The next morning, he woke up with a fever of 103 degrees, and the shortness of breath was “much worse.”

“The next four days at home were just awful,” Pace said.

He went back to the doctor and tested negative for the flu again, but with reported COVID-19 cases in the U.S. still limited to a few coastal hotspots, “we just couldn’t even imagine what it could be.”

Then, that weekend, Pace learned that the Rev. Tim Cole, a Washington, D.C., rector who also attended the CEEP conference, had tested positive for COVID-19. Seeing that news was the first time Pace considered the possibility that he might have the virus too, but it still seemed so far-fetched.

“My doctor and all of us were convinced that it couldn’t be COVID – because how could it possibly be COVID?” Pace recalled.

By March 9, that idea didn’t seem so crazy. Pace couldn’t walk more than 20 feet and could barely stand. His doctor met him at the hospital, where he had to be wheeled into the emergency room. He was soon transferred to a negative-pressure isolation room, which prevents airborne diseases from escaping. Hospital staff would put on space suit-like protective gear before coming in to treat him. Pace was given oxygen and IV fluids but never had to be put on a ventilator.

The morning after he was admitted to the hospital, he learned that he had tested positive for COVID-19 – but not from the hospital staff. His wife called to tell him that a case worker from the county health department had just shown up at their home to inform her that Pace’s test had come back positive and that she was to remain quarantined at home for two weeks. The doctors came in to tell Pace about 10 minutes later – “because they had to put the space suits on.”

Pace was grateful to learn the news from his wife “because we were able to pray and talk about what this means and have that personal moment.” Pace’s wife, the Rev. Jill Walters, is the early childhood and lower school chaplain at All Saints’ Episcopal School, also in Fort Worth.

Pace spent three days in the isolation room, mostly sleeping but sometimes praying the Daily Office on his phone, which was “very comforting.” Gradually, his fever subsided and he started to feel better, and the doctors told him he was improving enough to finish his quarantine at home. Late on the third day, he said, “it was actually a little bit surreal how quickly they booted me out of there.”

Because Pace and his wife would both be under separate quarantine restrictions but in the same house, a doctor from the Tarrant County Health Department came to their home to explain how to divide up the space so they would have no physical contact. The arrangement was odd, but it soon became routine.

“We lived in two parts of the house,” Pace said. “Jill would cook my meals and set them outside the door [to my bedroom] … and then I would open the door, but Jill had to be out of sight. So every day, the only way we would see each other was on FaceTime.”

That went on for about eight days, after which the county health department doctor returned and Pace tested negative for COVID-19 on two consecutive tests. Walters did not contract the virus.

Because Pace had limited his time in the church buildings to that March 4 Lenten talk and didn’t get close to anyone, there have been no reported cases of COVID-19 in the congregation. Initially, there was some concern because the church was used as a polling place in the Texas primary elections on March 3, but Pace had not been in the building at all since becoming sick.

Once those concerns were allayed, Pace was determined to make something good come out of this.

“We said, ‘OK, this could be an opportunity for evangelism,’” he told ENS. “It became very clear, then, the message is, ‘How do we love our neighbor? We follow the physical distancing guidelines.’”

Pace returned – virtually – to a church that looked very different in some ways, but familiar in others. Services are livestreamed, coffee hours and Bible studies are held on Zoom, and a phone tree has been set up so everyone in the parish will be contacted.

“One of the blessings that has happened is, for a long, long time, we’ve talked about, ‘How do we stay in touch with all of the people in our parish who are kind of on the edge and shut in and things like that? We need to figure out how to continue to communicate with them.’”

That solution turned out to be “the old-fashioned phone tree.” Pace has found that at this point, his parishioners are more concerned about the economic effects of the virus than of contracting it themselves. 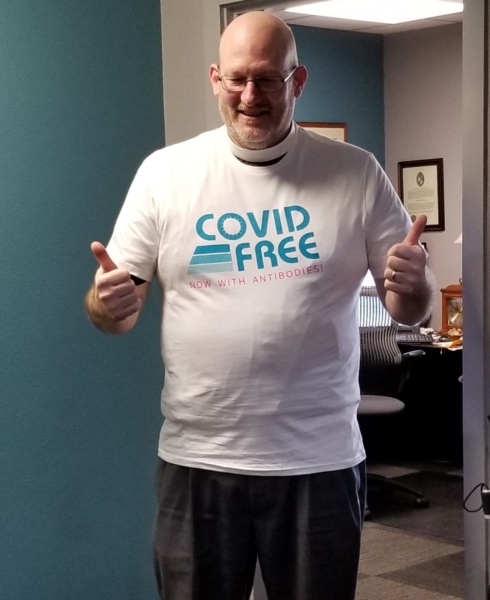 Pace is also helping out in a way that no one else in the Trinity community can: He’s donating his blood, which now contains antibodies that can fight COVID-19. The Food and Drug Administration is approving (on a case-by-case basis) the use of blood plasma from people who have recovered from the virus as a treatment for patients currently suffering from it. He’s trying to get the word out to other people who have recovered from COVID-19 that they can help, too.

“If you’re in this situation, go let your blood bank know that you’re available to give plasma if they call on you,” he said.

Besides the physical effects, the hardest part of having the virus was the isolation, Pace told ENS.

“I am an extrovert. I’m someone who loves to be out and among people, and I love to be in the middle of things. … That’s been hard.”

But he added that it was a small price to pay to keep his neighbors – both near and far – healthy.

In a global pandemic, “our actions affect the entire world, and that is a humbling and powerful message,” Pace said. “We are having to make these individual little sacrifices now so that the world will be OK. And that’s actually true not just with COVID-19, it’s true in all that we do. And that’s actually the message of Christ.”

– Egan Millard is an assistant editor and reporter for Episcopal News Service. He can be reached at emillard@episcopalchurch.org.

This may not be the very first case of an Episcopalian priest suffering from the current COVID 19 virus in the United States, but it may well be the first opportunity any TEC priest has had – after recovery – to talk about it publicly in this TEC news medium.

The Revd. Robert Pace, Rector of Holy Trinity Episcopal Church in Fort Worth, Texas, is presumed to have caught the virus at a late February Episcopal Church conference, which had earlier reported that:  “At least six people who attended the mid-February annual gathering of the Consortium of Endowed Episcopal Parishes, or CEEP, have tested positive for COVID-19, the coronavirus, and all six had participated in the same pre-conference event, the network said March 14 in an email update to attendees”

His own experience – which both he and his doctor originally thought to have been that of a common variety of cold or flu – turned out to have given Robert a new and more scary understanding of what a dangerous illness could entail. He is thankful to have actually recovered from COVID 19 and is now able to resume his Church activities – although, still, of course, in virtual isolation from his parishioners.
Father Ron Smith, Christchurch, New Zealand