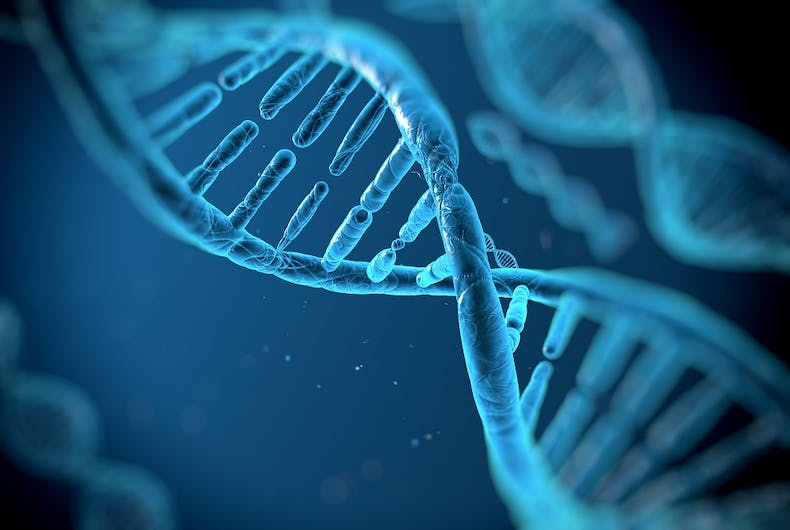 Saying that many transgender people know their gender identity at a very young age, “we thought that there was almost certainly a biologic component to gender identity,” study co-author J. Graham Theisen, an obstetrician/gynecologist and a researcher at the Medical College of Georgia at Augusta University, told Newsweek.

The study, published in Scientific Reports, sequenced the DNA of 17 transgender women, 13 transgender men, and 88 cisgender people and compared them. The subjects were all over 18-years-old  and all of the transgender participants self-identified as transgender and were diagnosed with gender dysphoria, the distress that comes from feeling that one’s gender identity and sex assigned at birth aren’t the same.

They looked for variations in the DNA of the transgender subjects that weren’t present in the cisgender subjects and, after eliminating a lot of the variants from their analysis, found 21 very rare variants in genes – genes that were common among the transgender people in the study but not found in the cisgender participants – on 19 different genes associated with “sexual differentiation in the brain.” The rare variants appear in less than 0.01% in the Exome Aggregation Consortium’s genome database.

The study authors stressed that they were not looking for and did not find a “transgender gene.”

“Like many human traits, gender identity is unlikely to result from the variation of a single gene,” the authors wrote in the study. “Notably, even the binary categories of ‘transgender male’ and ‘transgender female’ are not sufficient to describe all members of the gender-expansive community, with some individuals for example self-describing as gender non-binary or agender.”

“Rather than being tied to variation within a single gene, an individual’s gender identity is more likely the result of a complex interplay between multiple genes as well as environmental and societal factors.”

Thiesen said that the study’s goal is to help people understand themselves, but he understood that it could influence how transgender people are seen.

And while finding a biological origin to gender identity could lead to increased acceptance of transgender people, “we should not need medical diagnosis to seek acceptance and provide help,” she said.

“Accepting people’s differences at the condition that some biological factor is found as a ’cause’ of that difference is a distorted idea of acceptance.”

__________________________________________________________
In the current climate of ongoing research into gender/sexuality differences in human beings, this new study offers some insight into the FACT that being ‘different, in either gender or sexuality status may not be unconnected with some pre-dispositional factors that occur in the womb of the mother.
In the last 3 paragraphs that I have highlighted, however. it is considered by bioethics lecturer Simona Giordano, that societal acceptance of transgender people does not have to depend on the isolation of biological markers. Transgender people are obviously part of our amazingly diverse human situation needing to be understood for the gender they basically identify with. This is a common ‘human right’.
Father Ron Smith, Christchurch, New Zealand