Tennessee Bishop arranges for S.S.M. in his Diocese 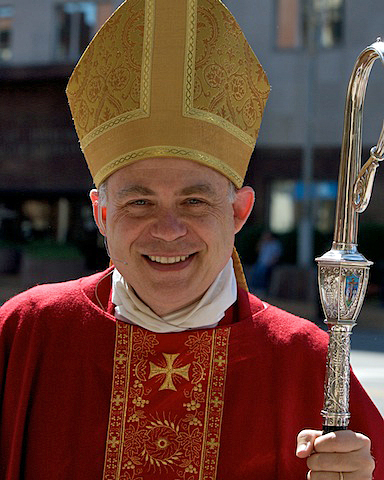 To begin that process, Bauerschmidt wrote in a two-page description of his policy, all canonically resident clergy in the diocese must notify him and assure him that the cleric’s congregation agrees to their use.

Bauerschmidt, who opposes same-sex marriage, said that “where there is disagreement in teaching about the sacramental rite of marriage between bishop and clergy there can be no effective oversight of marriage by the diocesan bishop.” Thus, another bishop must be available to “provide whatever episcopal support is needed for couples and clergy preparing for marriage.”

Bauerschmidt said his policy applies whether the trial-use rites or any other marriage rite is used.

Cole will handle the canonically required episcopal permission needed (Canon I.19.3 (page 60 here)) in what Bauerschmidt previously called the “extraordinary instance of the remarriage of a person with a previous spouse still living.”

Bauerschmidt said that the two rites for marriage, which General Convention first authorized in 2015 for trial use by both same-sex and opposite-sex couples, cannot be used in mission and chaplaincy churches of which he is effectively the rector, or in facilities for which he is directly responsible.

The policy, he said in a letter that accompanied it, is “intended to promote the highest degree of communion and fellowship in a time of challenge for the church. These provisions require consultation. No document can answer every question in advance.”

General Convention in 2015 said that the bishops of the church’s domestic dioceses needed to give their permission for the rites to be used or “make provision for all couples asking to be married in this church to have access to these liturgies.”. (The Episcopal Church includes a small number of dioceses outside the United States in civil jurisdictions that do not allow marriage for same-sex couples.)

There was widespread acceptance of the rites across the church. However, eight diocesan bishops in the 101 domestic dioceses did not authorize their use. Bauerschmidt was among those eight, as was Diocese of Albany Bishop William Love, Central Florida Bishop Greg Brewer, Dallas Bishop George Sumner, Florida Bishop John Howard, North Dakota Bishop Michael Smith, Springfield Bishop Dan Martins and Virgin Islands Bishop Ambrose Gumbs.

Last July, convention attempted to remedy to the situation by passing Resolution B012, which went into effect on the first Sunday of Advent, Dec. 2. Bishops and deputies moved the authority for deciding to use the rites from the diocesan bishop to parish priests.

B012 said diocesan bishops who do not agree with same-sex marriage “shall invite, as necessary,” another Episcopal Church bishop to provide “pastoral support” to the couple, the clergy member involved and the congregation. Some of the eight bishops have interpreted B012 as requiring – or allowing them to require – the involvement of another bishop.

Christopher Hayes, who as a deputy from California proposed the amended version that convention passed, has told Episcopal News Service that the key phrase is “as necessary.” Hayes thinks some bishops are misinterpreting that to mean “necessary” by the mere fact of the bishops’ disagreement, whereas he understands it to mean pastorally necessary. Such pastoral necessity, he said, would be rare.

B012 makes the rites available within every diocese of The Episcopal Church where civil law permits same-sex marriage.

Shortly after Convention, Bauerschmidt said B012 sets up “a particular structure that upholds the bishop’s unique role as chief pastor and teacher and presider at the liturgy,” even when the bishop cannot support same-sex marriage.

Some Tennessee Episcopalians grew concerned when Dec. 2 came and went without a policy from Bauerschmidt. A group of more than 100 lay and ordained Tennessee Episcopalians connected with All Sacraments for All People wrote letters to Bauerschmidt and Presiding Bishop Michael Curry on Jan. 7 to decry the former’s refusal to institute a policy for implementing B012. They noted that at least one couple and their priest have asked Bauerschmidt for guidance and were told to wait.

“Other committed couples anxiously wait to make their vows before God surrounded by the communities who love and support them,” the group told Bauerschmidt.

“We therefore are reluctantly notifying you of this delay in making the trial liturgies available in this diocese,” the signers told Curry.

Love is the only one of the eight who initially refused to permit use of the rites who has flatly refused to conform to B012. On Jan. 11, Curry prevented him from punishing clergy, laity and congregations who wish to use the rite, and Curry has referred the matter for investigation through the church’s clergy discipline process. Love is appealing the restriction.

Gumbs now has told his clergy to offer the rites without further obstacles. The other bishops, like Bauerschmidt, have said they intend to ask another bishop to assist when congregations ask to use the rites.

Here is the key to BishopBauerschmidt’s intention on the facility of Same-Sex Marriage couples being married in churches of his diocese:

“B012 makes the rites available within every diocese of The Episcopal Church where civil law permits same-sex marriage.

Shortly after Convention, Bauerschmidt said B012 sets up “a particular structure that upholds the bishop’s unique role as chief pastor and teacher and presider at the liturgy,” even when the bishop cannot support same-sex marriage.”

Quite rightly (in my opinion) the Bishop of the Episcopal Diocese of Tenessee – in common with other bishops of the ‘Communion Partnership’ who do not approve of Same-Sex Marriage (all except Bishop Love of the Albany Diocese in New York) –  has taken the option available under Canon Law in TEC to allow another bishop to oversee the Marriage of Same-Sex couples within his diocese. This obviates the need for a disciplinary process against clergy in his diocese who want to conduct such rites in their own parishes.

This would seem to be the only agreeable way to accommodate TEC’s desire to facilitate Same-Sex Marriage in every diocese of the Episcopal Church in the U.S.