Theology of Taint in the Church of England? 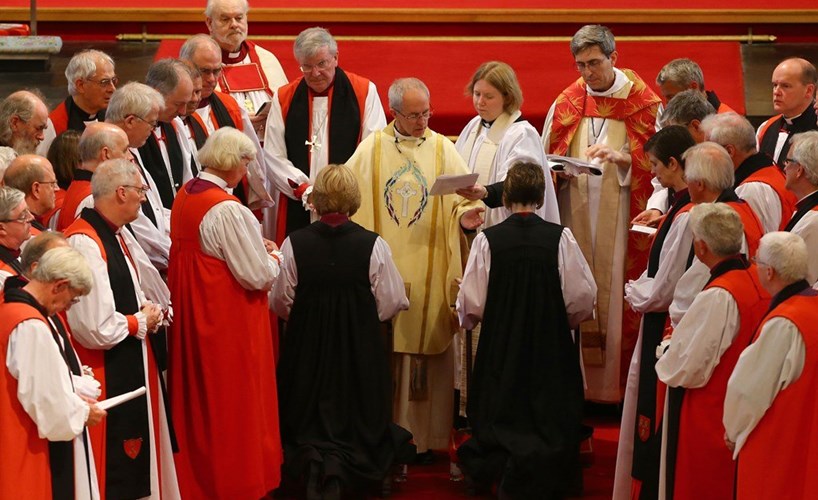 The Archbishop of Canterbury at the consecration of Bishop Mullally (left) and the Bishop of Gloucester, the Rt Revd Rachel Treweek

A PCC’s rejection of episcopal ministry from a bishop ordained by the Archbishop of Canterbury, on the grounds that the Archbishop has consecrated women as bishops, is based on a theology of taint that the traditional Catholic bishops of the C of E have “firmly rejected”, the Church’s Independent Reviewer, Sir William Fittall, has judged.

His decision, published on Friday, concerns a grievance against the Bishop of London, the Rt Revd Sarah Mullally, brought by the PCC of St George’s, Headstone, after it rejected both of her suggestions for episcopal oversight. The grievance is unjustified, Sir William writes.

His decision, which refers to the Thirty-Nine Articles as well as the Bishops’ Declaration, also relies on the historic understanding that parishes “do not have the right to pick and choose or to substitute their own judgement for that of the wider church”.

While PCCs can request episcopal oversight from a male bishop (under paragraph 26 of the House of Bishops Declaration that accompanied the women-bishops Measure), the Bishop is not under an obligation to meet other demands, he says.

“It cannot have been the intention of paragraph 26 to legitimise any and every conceivable theological conviction relating to gender and ministry and I do not believe that to be its effect,” Sir William writes.

In 2016, the PCC of St George’s passed a resolution under the Declaration requesting that episcopal ministry be entrusted:

(i) to a male bishop who stands in the historic, Apostolic, and sacramental succession of bishops so ordained;

(ii) at whose consecration a male bishop who had not consecrated a woman as a bishop presided;

(iv) who ordains only men to the priesthood.

Sir William considers that the first and fourth requests are consistent with the model produced for parishes by Forward in Faith. He goes on to discuss the second and third.

The third was “at the heart of the grievance”, constituting a request that the Bishop of London should not invite the Bishop of Fulham, the Rt Revd Jonathan Baker, to provide episcopal ministry, because he had been married again after being divorced (News, 31 October 2014).

In August, 2016, the Bishop of London at that time, the Rt Revd Richard Chartres, told the PCC that he had asked the Rt Revd Robert Ladds, one of the assistant bishops in the diocese and a retired Bishop of Whitby, to provide episcopal ministry. This approach was, he wrote, “consistent with the special arrangements we have made for conservative evangelical parishes”.

The Vicar of St George’s, the Revd Stephen Keeble, pointed out that the House of Bishops’ Declaration stated that the parish should be provided with a serving rather than retired bishop. The Bishop of Willesden, the Rt Revd Pete Broadbent, responded that Bishop Chartres — who did not ordain women to the priesthood — remained the parish’s Bishop for “purposes of oversight” but that, after his retirement, provision would have to be revisited.

After the installation of the present Bishop of London, the Rt Revd Sarah Mullally, Bishop Broadbent informed Mr Keeble, that she had decided that episcopal ministry for the parish would be provided by the Bishop of Maidstone, the Rt Revd Rod Thomas. Bishop Thomas was appointed in 2015 to minister to conservative Evangelical parishes that could not accept a woman bishop (News, 8 May 2015).

In response, Mr Keeble pointed out that his PCC’s resolution had requested a bishop “at whose consecration a male bishop who has not consecrated a woman as a bishop presided”. Bishop Thomas was consecrated by the present Archbishop of Canterbury, who by then had consecrated two women bishops, including Bishop Mullally.

Bishop Mullally met Mr Keeble in June before informing him that she had invited Bishop Baker to provide episcopal ministry, writing that their theological concerns about him “are not theological concerns relating to the ordination of women as Bishops and Priests, and therefore do not fall within the scope of the House of Bishops’ Declaration”. If this was unacceptable, she said, she was willing to ask Bishop Thomas as an alternative.

A further meeting between her and Mr Keeble, held in October, did not secure agreement, and the PCC — which also argues it would be inappropriate for Dr Thomas to provide ministry, because of differing traditions — voted to bring a grievance against her.

WILLIAM FITTALL, a former Secretary General of the General Synod, has been knighted in in the New Year Honours list, for services to the Church of England

In 2010, the House of Bishops announced that there was no legal prohibition to the consecration as bishop of someone who had married after a divorce, or married a divorced person (News, 25 June 2010). The statement did not, Sir William notes, “create any kind of procedure for individual parishes to opt out of the ministry of particular bishops, once appointed, on the grounds of their marital status”.

He writes of “the historic understanding that, within an ordered church, parishes are expected to receive the ministry of those who have been duly appointed to minister to them; whatever reservations they may have about a particular bishop, whether on personal or theological grounds, they do not have the right to pick and choose or substitute their own judgement for that of the wider church.”

He points, too, to Article XXVI of the Thirty-Nine Articles, on “Of the Unworthiness of Ministers, which hinders not the effect of the Sacrament”.

The House of Bishops Declaration of 2014 stated that “those unable to receive the ministry of women bishops or priests continue to be within the spectrum of teaching and tradition of the Anglican Communion,” but, Sir William notes, it “concerns theological conviction in relation only to gender and ordained ministry. It does not extend to matters of marital status or indeed any other consideration.”

In relation to the PCC’s complaint about Bishop Thomas, he cites a 2015 statement from the Council of Bishops of The Society which rejects “any so-called ‘theology of taint’ whereby a bishop who ordained women to the episcopate or the priesthood thereby invalidates his own orders and renders invalid the orders of those whom he subsequently ordains” (News, 2 October 2015).

The request for a bishop consecrated by a male bishop who has not consecrated women bishops is, Sir William says, “a stipulation based on a theology which Traditional Catholic Bishops in the Church of England have firmly rejected. And it must be doubtful whether such a theology comes within the spectrum of Anglican teaching and tradition, even interpreted at its broadest.”

Sir William also rejects as “unjustified” the argument that Bishop Thomas is of a different tradition, observing that “large numbers of parishes have flourished despite significant differences of churchmanship between themselves and the bishops who have ministered to them”.

Bishop Mullally’s response to the PCC reflected “a willingness to respond pastorally to its acknowledged theological convictions about marital status and ordained ministry”.

Bishop Mullally has agreed that, once either Bishop Baker or Bishop Thomas is confirmed as providing episcopal ministry, she is willing to invite Bishop Ladds to undertake duties in the parish on his behalf.

The whole problem of what used to be called “Flying Bishops” is now coming home to roost in the Church of England’s Diocese of London.

The Parish of St.George, Headstone, in the Diocese of London – which has problems with the ministry of women – has rejected the ministry of the only bishop in the Church of England to be specifically ordained bishop to parishes such as St. George’s:- Despite the fact that his credentials for ordination were that he himself did not approve of women’s ordination!

THE PROBLEM? He was ordained by the Archbishop of Canterbury who HAS actually ORDAINED WOMEN (thereby, considered by the PCC of the Parish of St.George to have become tainted in the process!).

Here are the salient paragraphs in this story:-

“After the installation of the present Bishop of London, the Rt Revd Sarah Mullally, Bishop Broadbent informed Mr Keeble, that she had decided that episcopal ministry for the parish would be provided by the Bishop of Maidstone, the Rt Revd Rod Thomas. Bishop Thomas was appointed in 2015 to minister to conservative Evangelical parishes that could not accept a woman bishop (News, 8 May 2015).

“In response, Mr Keeble pointed out that his PCC’s resolution had requested a bishop “at whose consecration a male bishop who has not consecrated a woman as a bishop presided”. Bishop Thomas was consecrated by the present Archbishop of Canterbury, who by then had consecrated two women bishops, including Bishop Mullally.”

This is all about what has been named the ‘Theology of Taint’ – which, in this case, relates to those who believe that; not only are women not eligible for ordination; anyone who lays hands upon them for the purpose of ordination is thereby ‘tainted’ with virtual heresy!

This is the dilemma in which the Church of England now finds itself, by allowing parishes the luxury of choosing their own episcopal ministry – to suit their theological view of ordination. This present situation is clearly a case where the Church’s Independent Reviewer, Sir William Fittall, has judged correctly; that the catholic tradition of the Church of England does not allow the ‘Theology of Taint’ to apply to its sacerdotal ministry.