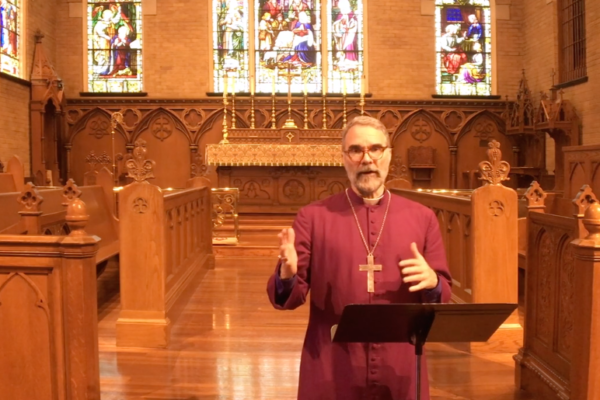 Dallas Bishop George Sumner, shown here in an image from an online video released after the 79th General Convention, has announced his plans for allowing parishes to use same-sex marriage rites in their churches.

[Episcopal News Service] Three parishes in the Diocese of Dallas have asked to perform same-sex marriage ceremonies under a General Convention compromise with Bishop George Sumner and other conservative diocesan bishops, and Sumner announced this week that Missouri Bishop Wayne Smith will provide pastoral oversight of those three parishes.

The move, as outlined in Resolution B012 approved in July, will allow the parishes to begin offering the church-approved trial-use rites. The resolution requires bishops who disapprove of same-sex marriage because of their theological beliefs to ask fellow bishops to assist.

The rites were first approved for use in 2015, but eight bishops still refused to allow them in their churches leading up to the 79th General Convention. Since passage of B012, the response from those eight has varied dramatically. Virgin Island Bishop Ambrose Gumbs, for example, reversed himself and now will allow the rites, while Albany Bishop William Love announced last weekend he intends to defy General Convention and prohibit the rites.

“Bishop Smith is a person of humor, intelligence, wisdom, and faith, and I am grateful for his heart to help us in this way. He is also a Texan happy to minister in the Lone Star State,” Sumner said in an online statement posted Nov. 14. “Both he and I share the hope that the three parishes will continue to invite me annually to come to preach, teach, and share in worship.”

The arrangement for another bishop to accept pastoral oversight is similar to the Delegated Episcopal Pastoral Oversight, or DEPO, that parishes churchwide may request if they feel at odds theologically with their diocesan bishop. In such cases, the parishes that receive pastoral oversight from an outside bishop remain part of their home diocese.

“All the costs associated with this arrangement will be borne by the [Dallas] diocese,” Sumner said. “The parishes’ obligations and privileges within the Diocese of Dallas continue unchanged.”

The Diocese of Missouri also announced the arrangement on its website.

“I’m very pleased that we’ll be able to offer the sacrament of marriage to same-sex couples,” the Rev. Paul Klitzke, rector at Ascension, told Episcopal News Service. “I’m also happy that pastorally we’ll be able to refer to those who’ve been married already as married, which given the current canons of the Diocese of Dallas has been in question.”

Klitzke, however, also hinted at mixed feelings about the plan, which will mark a break with the pastoral oversight previously provided by Sumner. The bishop intends to delegate all sacramental and liturgical oversight of the three parishes to Smith, not just their use of the same-sex marriage rites. Springfield Bishop Dan Martens has taken a similar position on implementation of B012 in his Illinois diocese.

“We wish [Sumner] could still be our bishop,” Klitzke said. He thinks more congregations in the diocese would have asked to use the same-sex marriage rites “if it didn’t mean a change in the relationship with bishop diocesan.”

The Rev. Casey Shobe, rector at Transfiguration, told ENS in August he hoped to have a “significant celebration and renewal of vows” next year for couples who married elsewhere rather than waiting for that opportunity in their Dallas church, and he expects a number of same-same sex couples to get married at the church in the coming year or two.

Shobe wasn’t immediately available by phone Nov. 15 but said in August that a plan for outside pastoral oversight “would result in Transfiguration experiencing a big leap forward on a set of matters that are deeply important to us, which have consistently kept us at odds with our bishop in the past.”

A gay couple at Ascension had been interested in marrying, but tragically, one of the two partners died suddenly this year before their ceremony could occur at the church. Resolution B012 takes effect on Dec. 2, the first Sunday of Advent. “There was definitely heartbreak over that here,” Klitzke said.

No other gay or lesbian couple has yet requested to be married at Ascension, but that door is now open.

“We felt it was important to take this step without someone in waiting, because intention matters,” Klitzke said. “In order for us to be welcoming to those who might want to be married, we need to be ready.”

Until this year, the eight dioceses blocking same-sex marriage were Albany, Central Florida, Dallas, Florida, North Dakota, Springfield, Tennessee and the Virgin Islands. Seven of the eight bishops have indicated they intend to implement B012, however reluctantly, though the specific plans differ from diocese to diocese.

Only Love has said explicitly that he will not accept or implement the resolution, potentially setting up a legal showdown with the church and diocesan clergy who are interested in moving forward with same-sex ceremonies in their congregations.

Here, in this article from Episcopal News Service in the US (ENS), we have proof positive that the compromise allowed for by TEC’s General Convention on the subject of Same-Sex Marriage is actually working – even in dioceses where the Bishop himself is not disposed to conduct the ceremony.

In contradistinction to the Bishop of Albany in the State of New York, who has issued a directive to his clergy that they will not be allowed by him to conduct same-sex marriages within his diocese (proclaiming them to be ‘the work of the devil) ; the Bishop of Dallas, George Sumner, has announced his willingness to allow Missouri’s Bishop Wayne Smith to provide pastoral oversight necessary for the three parishes in his diocese of Dallas.

This action of Bishop Sumner is in accord with intention of the self-described ‘TEC Communion Partner Bishops’ who, despite their theological opposition to Same-Sex Marriage or Blessings, have decided to allow parishes within their dioceses that want to access TEC’s provision for S/S Marriage, to have their  pastoral oversight needs on this particular issue to be met by another TEC bishop who approves of the new enablement.

That other ‘Communion Partner’ Bishops should also appoint a proxy (co-adjutor) bishop to facilitate same-sex blessings in their diocese is a sign of the CP Bishops wanting to maintain canonical fellowship with their fellow bishops in the Episcopal Church and a signal that, for them, same-sex marriage is not a matter of ‘First Order’ importance that would necessitate their departure from TEC.

What will happen in the case of Bishop Love and the Diocese of Albany (of which he is the Ordinary) remains to be seen, although the Presiding Bishop of TEC, Bishop Michael Curry, has expressed his disappointment at his intransigence on this issue and has now indicated that there will be some disciplinary procedure to follow.