During Pride in London, Synod in York calls for ban on conversion therapy 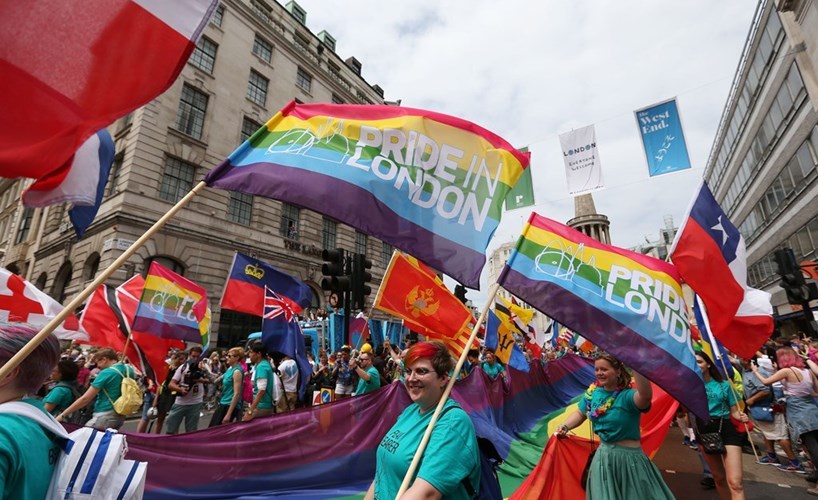 Celebrations: Pride in London took place while the Synod met in York

THE General Synod has called on the Government to ban conversion therapy. The move was backed by the Archbishop of York, Dr Sentamu, who said that a ban on the “theologically unsound” practice would enable him to sleep at night.

Members had initially been asked to endorse a statement signed by professional bodies condemning such therapy as “unethical and harmful and not supported by evidence”, but, after passionate speeches by bishops and several emotional personal testimonies, proved willing to go further.

The private member’s motion was introduced on Saturday by Jayne Ozanne, a lay representative from Oxford diocese who has described how undergoing such therapy resulted in her having two breakdowns (News, 30 June). It asked the Synod to endorse a statement issued this year by professional bodies, including the Royal College of GPs and UK Council for Psychotherapy, which states that conversion therapy “has no place in the modern world. It is unethical and harmful and not supported by evidence.”

Conversion therapy was “a form of abuse”, she said, “from which vulnerable adults need protecting”.

The therapy she had undergone was “done by kind, but mostly professionally unqualified prayer ministry individuals who, too, wanted to see me healed. The prayer would seemingly work for a few months or years. and then I would find myself struggling again – ashamed and guilty that it hadn’t worked.

“I became depressed, wondering why God was choosing not to heal me. And my desperation grew. I turned to look for reasons why healing didn’t come. Many sincere Christians, armed with the warped theology of conversion therapy, implied it must be my fault.

“It led to two breakdowns and two spells in hospital, with my body cracking under the strain. My story is, sadly, not unique.”

She described calls for more scientific evidence of proof of harm as a “smokescreen”. She argued: “It is rare for randomised controlled trials to show evidence of harm, as it would take several years of careful monitoring. In addition, it is highly unlikely that any reputable ethics committee would ever give approval for a trial of a treatment they strongly suspect – due to the many testimonial reports – to be harmful.”

The debate was “actually quite simple: Do we trust our medical health professionals and academics – including many sincere, godly Christians – to know what they are talking about?”

Among those who offered her support was the Bishop of Liverpool, the Rt Revd Paul Bayes.

“The world needs to hear us say that LGBTI-plus orientation and identity is not a crime,” he said, with quiet fervour. “We are called to help one another to conform their lives to Jesus Christ and to live lives of holiness, but we do not need to engage people in healing therapy if they are not sick. If the Church suggests that it is a sickness, then all its statements of welcome and inclusion of the LGBT community are null and void.” He was proud to be associated with Gay Pride in Liverpool, to be held later in the year out of respect for Michael Causer, a gay man who was killed in 2008 in an act of hatred.

In an emotional speech, Ed Cox (Church of England Youth Council) declared an interest as a scientist, and a “queer” person. While the Church wanted all people to be treasured, loved, and valued, this had not happened for the LGBT community.

He had put his sexual identity down to his relationship with his father, a lifestyle choice, a phase, and experimenting, and had been told that he was “made wrong” by God. He had been diagnosed with severe depression because of this, and begged the Synod to pass the motion as it stood, to prevent others’ going through the same ordeal.

Dr Simon Clift, a consultant in occupational health, argued that, when distress arose as a result of a conflict between beliefs and desires, “surely one legitimate option would be for them to seek the input of appropriately trained therapists who can address these desires in order to diminish them?”

An amendment was moved by the Revd Dr Sean Doherty, a tutor at St Mellitus theological college, and a trustee of Living Out, which seeks “to help Christian brothers and sisters who experience same-sex attraction stay faithful to biblical teaching on sexual ethics and flourish at the same time”. It affirmed that pastoral care, prayer ministry, and professional counselling were “legitimate means of supporting individuals who choose them freely, provided that they respect the property dignity of human beings, and do not involve coercion or manipulation or make unwarranted promises about the removal of unwanted feelings”. It asked the House of Bishops to draw up guidelines “to discourage inappropriate pastoral practices, and to encourage good ones”.

I apologise to readers of ‘Kiwianglo’ for not having posted lately, by virtue of my holiday with my wife, Diana, in Europe. However, today, on board P. & O.’s cruise liner ‘Ventura’. en route from Southampton to Madeira and the Canary Islands; I came across this news item from the Church Times, reporting that the Anglican Church’s York Diocesan Synod has petitioned the U.K. Government to outlaw the process of ‘Conversion Therapy’ for LGBTI people, in the expectation of ‘curing them’ of their natural sexual orientation that is different from the predominant  male-female norm.

It has long been known by those whose sexual orientation is actually, different from the norm, that they have no way of being legitimately ‘converted’ from their natural sexual orientation, and to be expected to be able to conform to the majority sexual disposition could be both a legal and spiritual impropriety equal to a breach of common human rights.

Thank God the York Synod had requested the U.K. Government to outlaw the practices of those in the psycho-psychiatric professions who contend that a person’s natural, God-given, sexual identity can (or even should) be ‘converted’ to comply with the majority.

Jane Ozanne’s compelling testimony to the contrary, should help the majority of people to understand the position of those whose lives have been spoiled by efforts – however well-meaning – to change the sexual orientation of LGBTI people in society.

(currently “at large” in the Bay of Biscay)