Bishop of Liverpool calls on G.S. to support Inclusion

Senior bishop calls for change in C of E attitudes to gay people
Paul Bayes, bishop of Liverpool, says LGBT people have been bruised and broken by the church 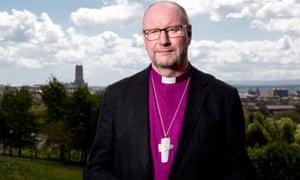 Paul Bayes, the bishop of Liverpool: ‘I have come to believe that we need to change the church.’ Photograph: Diocese of Liverpool

A senior bishop associated with the Church of England’s evangelical wing has called for far-reaching change in the church’s attitudes to lesbian and gay people and a meaningful welcome to Christians in same-sex relationships.

Acknowledging that he has been “profoundly changed” by encounters with lesbian and gay Christians, including within his own family, Paul Bayes, the bishop of Liverpool, has said: “I have come to believe that we need to change the church.”

LGBT people have been bruised and broken by the church, he said.

Bayes is one of a dozen prominent church figures – including two bishops, a former bishop, the dean of St Paul’s cathedral and two archdeacons – to contribute to a book aimed at evangelical members of the Church of England, who are among the most resistant to accepting lesbian and gay people in the church.

The book is being launched this weekend, in the run-up to the church’s General Synod in York next month. More than half of the five-day synod is being set aside for discussion behind closed doors on the issues of sexuality and same-sex marriage.

Following the synod’s private discussions, a formal debate on the issue of recognising and blessing same-sex relationships – which has exposed deep divisions within the church – is likely next year.

The Church of England’s traditional teaching is that marriage is a union between a man and a woman. It does not conduct same-sex marriage services, nor permit clergy to bless same-sex civil marriages. Clergy cannot be married to same-sex partners, and any same-sex relationships are expected to be celibate.

Bayes’s message that change is needed will reverberate widely because of his former position as evangelism adviser to the church’s archbishops’ council.

Most conservative evangelicals believe that being in a same-sex relationship is incompatible with Christianity, while others believe even admitting a same-sex orientation is sinful.

In the book, Bayes says that evangelical Christians need to learn to listen carefully. “Too often it seems easier to speak, and if necessary to shout, until people say they agree with me. Without careful listening we’re left with raw contention.”

He adds that the “harsh fact is that the church has played, and still plays, no small part in [the] bruising and breaking” of LGBT Christians. “I wanted to express my sorrow to this small and faithful congregation for the way in which Christians [have] treated them.”

He concludes that it is “evident to me” that the church needs be welcoming and inclusive.

Speaking to the Guardian, Bayes acknowledged that the C of E was “trying to find the right way to cope with a fast-changing England”, in which same-sex civil partnerships and marriages were common. The church had to rise to the challenge of being “faithful to the teaching of the bible and to the culture we live in”.

His intervention was “not designed to shortcut our processes or bounce the church along”. But, he said: “Listening is quite a dangerous thing. If you listen, it might change you.”

He added: “In my own life, change has come. I never believed we should exclude [LGBT Christians], but not until now have I believed we need to be working harder to include them.”

After being appointed as bishop of Liverpool two years ago, Bayes visited a local LGBT Christian congregation, Open Table. “I saw their faithfulness as Christians, often in difficult circumstances, sometimes in trying to say who they are within the church. I want to make room for a congregation like Open Table.”

His extended family included a same-sex couple with children, he said. “I’ve seen love shared and I’ve seen good parents – and I’ve also seen the welcome of the church withdrawn. I regret that.”

Insistence that LGBT Christians should be celibate in order to practise their faith should be dropped. “I’ve learned to respect the experiences of people who want to celebrate and express their sexuality, and be within the church.”

As a bishop, he maintained discipline on current church teaching on same-sex marriage. But, at the same time, he added: “I seek to listen to what the spirit is saying … A key part of this involves listening to the experiences of LGBT Christians, many of whom have been hurt, marginalised and oppressed by the attitudes of the world and the church.”

Some passages of the Bible need to be reinterpreted with time, he said. Conservative evangelicals often quote a verse in Leviticus which describes sexual relations between men as an “abomination”.

“There are some people who are sure that what they believe to be the word of God in the Bible is unchanging,” said Bayes. “What’s in the bible is crucial and I don’t believe I’m going back on the bible, though some people may think that.”

In a foreword to the book, Journeys in Grace and Truth, another evangelical bishop, Colin Fletcher, says: “There are an increasing number of evangelicals who … are looking afresh at the scriptures underpinning these debates, and particularly at the New Testament texts, and who are reaching different conclusions from the traditional interpretations of the past.”

Fletcher, the bishop of Dorchester, adds: “What I am pleading for is an openness amongst evangelicals to discuss a range of differing beliefs to their own and to engage biblically with those who hold them without just writing such people off as ‘revisionists’ or (as described by a previous generation) ‘woolly liberals’.”

Earlier this month, Bayes faced criticism from conservative Anglicans in the UK and abroad after appointing an American bishop who supports same-sex marriage to the diocese of Liverpool.

In anticipation of the Church of England General Synod in York next month, this fulsome declaration by several Evangelical Bishops in the Church of England, including the Bishop of Liverpool Paul Bayes – that the Church needs to embrace the reality of committed Same-Sex relationships – can be welcomed by those in the Church who have been subjected to suspicion and outright hostility, merely for the fact that their sexual orientation happens to be different from the predominantly binary model.

Bishop Paul says: “LGBT people have been bruised and broken by the church”

As a traditional Evangelical Anglican, Bishop Paul entertained, and lived with for a long time, the Church’s understanding that homosexuality was an aberration and a denial of God’s purpose in Creation. However, after being confronted with the reality of a Same-Sex relationship in his own extended family, and examining the behaviour and Christian commitment of ‘Open Table’ -an openly supportive  congregation – his attitude changed dramatically:

“In my own life, change has come. I never believed we should exclude [LGBT Christians], but not until now have I believed we need to be working harder to include them.”

After being appointed as bishop of Liverpool two years ago, Bayes visited a local LGBT Christian congregation, Open Table. “I saw their faithfulness as Christians, often in difficult circumstances, sometimes in trying to say who they are within the church. I want to make room for a congregation like Open Table.”

Whatever happens at the C. of E. General Synod – about the Church’s attitude towards LGBTI people in the Church – one can no longer hold the charge of homophobia against some of its more notable Evangelical Bishops. Let’s hope and pray that Bishop Paul’s eirenic influence may be translated into a more welcoming attitude of the Church of England towards those in the Church whose sexual nature is different from the norm, but whose love for God can be providentially influenced for the good by a more open welcome.