A YouGov poll on same-sex marriage was commissioned for Thursday’s Westminster Faith Debate, and – as usual – revealed that religious people don’t necessarily agree with their leaders. The tables are below. Half of all people who identify themselves as religious are in favour of allowing same-sex marriage. In the case of Anglicans and Catholics there is a small minority in favour: it’s Baptists and Muslims who are mostly against. Conversely, those who deny having any religion are most supportive of same-sex marriage. Regular churchgoers are more opposed than those who only identify with a religion.Most churches claim to welcome everyone irrespective of sexual orientation, but only 21% of the public think they do. Given the overall balance of opinion among religious people, this is telling: clearly the opinions of church leaders are making gays and lesbians feel much less welcome than the average church thinks they would be.Other predictors are age (the older you are the more likely you are to oppose it) and gender (disapproval is mostly a man’s thing).

Overall, the more emphasis people give to religious authority, the less they support same-sex marriage. Those most opposed are those who both claim certainty about belief in God and also make decisions primarily on the basis of explicit religious authorities. The poll sets them at 9% of the population.

So gone are the days when church leaders played an influential role in the moral debates of the nation. Now their pronouncements are only of interest to church members, and even they only treat them as authoritative if they agree with them anyway.

This leaves some questions. If you know the answers please put them in a comment. 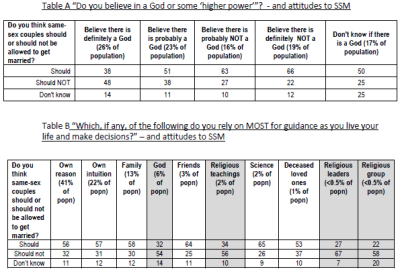 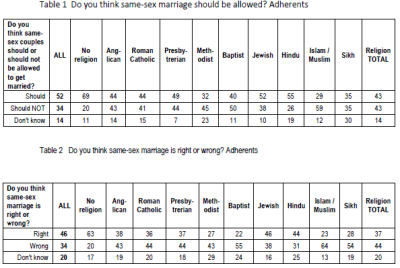 Have just discovered this little gem from the web-site of ‘Thinking Anglicans. Jonathan Clatworthy, of  ‘Modern Church‘ in the U.K.,  is well up to date with proceedings in the Church of England, and has made his own comments on the recent Poll.

I suspect that the statistics here might be comparable to the situation in the Roman Catholic Church – vis-a-vis structured opposition to Women and Gays in the Church.

How often have Church Leaders opposed the people on matters which concern the practicality of living out their lives in the contemporary world? And why do Church authorities still anguish about women in ministry, gays in monogamous relationships, and the use of contraception – in a world growing short of natural resources to sustain a burgeoning over-population at a time of global climate change?

Galileo would be amused to be around today. After all, his theses on creation were also disregarded by the Church – until the evidence became more explicit.

How long, O Lord, how long?