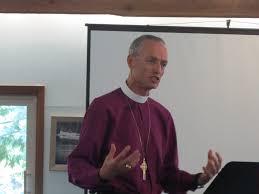 My family and I are living proof of the practical realities of globalization; the rapid integration of formerly widely diverse elements of material and social culture, economics, and most importantly, values and morality, in an ever ‘shrinking’ world. We are New Zealand-Americans. Who would have dreamed even a generation or so ago that only 238 years after Captain Cook’s Endeavor limped into Poverty Bay and 400 years from the founding of Jamestown that the children and grandchildren of British Isles emigrants who followed these visionaries out to the ends of the earth would now be emigrating between these newly discovered lands of unlimited potential and promise. Yet, here we are…new Americans and proud native kiwis; Anglican Christians from solid ‘British Isle stock’ unintentionally helping to establish ontological proof for the human element in globalization.

And, we are part of the oft-overlooked but only eternally critical element of this contemporary phenomenon – it’s impact on the Church and particularly the proclamation of the unchanging and unchangeable Truth of the Gospel in the face of the multipronged, unrelenting pressures inherent in global integration for belief systems to ignore, overlook or abolish distinctions, blur lines of demarcation and ‘move border stones’ in order to expedite the other perceived irenic ‘benefits’ of ‘the global village.’

My wife’s family is still rooted in the beautiful but constantly moving soil of Christchurch on New Zealand’s South Island that is almost daily rocked by seismic tremors or aftershocks. Tragically, the Gothic-revival cathedral, like so many institutions we thought we could always ‘depend upon’ as historic for Christian witness in our homelands – old and new – has been shaken to its foundations and is battered beyond structural repair. It must be abandoned, demolished and rebuilt. (The same reality brought us to America as we serve the Church of Nigeria (Anglican Communion) in the Convocation of Anglicans in North America rebuilding the witness of biblical, orthodox, missional Anglicanism where the broken foundations of the Episcopal Church in the United States and the Anglican Church in Canada have made them structurally unsafe for believing Christians).

On 16 April, the Anglican Diocese of Christchurch held an international press conference and public celebration (in a stark, visual demonstration of the wilting moral and spiritual leadership of that body, only 40 ‘locals’ showed up from that city’s population of 384,000 according to The New Zealand Herald) to unveil avant garde Japanese architect Shigeru Ban’s model for a NZD 5 million (USD 4.2 million) cardboard cathedral. Cardboard.

So, as perhaps the greatest architectural monument to the Faith of New Zealand’s Christian founders is replaced with an oversized origami multiuse space (the official description) designed by a Buddhist, it is appropriate to turn our minds to Peter’s ‘architectural guidelines’ in his first Epistle particularly as they relate to current events in the seismic shifts in Anglicanism and the response of Christians to very real crises affecting the Body of Christ.

As you come to him, the living Stone-rejected by humans but chosen by God and precious to him- you also, like living stones, are being built into a spiritual house[a] to be a holy priesthood, offering spiritual sacrifices acceptable to God through Jesus Christ. For in Scripture it says: “See, I lay a stone in Zion, a chosen and precious cornerstone, and the one who trusts in him, will never be put to shame.” I Peter 2:4-6

The 104th Archbishop of Canterbury announced his resignation on March 17, 2012, ironically the feast of the great Gaelic saint, Patrick, in his native Wales. With the greatest due respect to His Grace, we must assume, therefore, that he knew his sermon on the Feast of the Resurrection this year would be his last as primus inter pares in the Anglican Communion and Primate of England; his final Easter message from one of the world’s most audible pulpits. As we have come to expect, the Archbishop rarely fails to disappoint.

Rather than focus the eyes and ears of a world particularly watching and listening on that day for his valedictory remarks to the Truth of the Resurrection and the uniqueness of Jesus Christ as the Way, the Truth and the Life, or, at the very least, to turn the light of world attention toward the horrific tragedy of Christians murdered, tortured or driven from the homes by Islamic militants (40 deaths that very morning in his own titular ‘flock’ in Nigeria), he passed quickly over pro forma thoughts on ‘hope’ then rambled through a rather inaccurate analysis of the Palestinian-Israeli peace process. As believing, Anglican Christians in Jos, Nigeria were greeted on Easter morning with guns and firebombs courtesy of Boka Haran, the Muslim terrorist organization, the official leader of their Communion spent his last great Feast Day on the world stage dithering about ‘hard choices’ over land-for-peace in Palestine.

In stark contrast, I read with great hope and respect the official comments from the Primate of All Nigeria, the Most Rev. Nicholas Okoh, upon the announcement of the Archbishop of Canterbury’s early retirement. Our Primate is a man of rare moral and spiritual courage at a time when these qualities are desperately needed in the worldwide Christian community and particularly in that branch of Christ Church wherein we have been called to serve. Archbishop Okoh honestly appraised the years of Dr. Williams leadership in the See of Canterbury as a failure of moral and spiritual leadership. Bluntly, to continue the analogy, he has allowed shrill and often apostate forces and their inevitable aftershocks to crack the foundations of the Anglican Communion and has offered only cardboard solutions.

In contradistinction, through the Church of Nigeria, Almighty God is ‘ building a great spiritual house out of living stones’ As Islam edges out Anglicanism in England’s Midlands as the majority religion to the accompaniment of stunning silence from Canterbury, the Church of Nigeria (Anglican Communion) continues to grow at an astonishing rate while burying it’s martyrs in the northern states of the Federal Republic and caring for its refugees made homeless by the fury of Muslim ‘advancement’. The difference is architects. In Ezekiel 22:30, the Lord states: “And I sought for a man among them, that should make up the hedge, and stand in the gap before me for the land…”

We are abundantly blessed in the Convocation of Anglicans in North America to serve under the leadership of an architect chosen by the Lord who will ‘stand in the gap’ even when pilloried by the international press and media moguls for speaking the truth.

And we are in grave need of leadership. On Easter Monday, as our brothers and sisters in Christ in Jos prepared to bury the dead, the Hon. Johnnie Carson, Assistant Secretary of State for African Affairs, in an address before the Center for Strategic and International Studies in Washington, D.C. referred to Nigeria as “home to the sixth largest Muslim population in the world (and) Nigeria’s Muslim population is larger than any Arab state.”

The text of his remarks was released with an additional, non-original phrase: “and it’s by far the largest country in the world with approximately equal numbers of Christians and Muslims.” These were not the Secretary’s statements to the symposia and not his intention. It is no surprise, therefore, that while thousands die, the ‘land of the brave and home of the free’ seems to have adopted the ‘Canterbury approach’ to Boka Haran; refusing to declare it a terrorist organization and take the initial steps to halting the shedding of Christian blood in Africa’s largest Christian nation.

The only voice for martyred Christians dying for the Cross under the shadow of the crescent is the faithful, believing Church. A trustworthy Church. A biblical Church. This is not theoretical or theological; it is a matter of life and death.

Christian leaders such as the Primate of All Nigeria willing to ‘stand in the gap’ and build with ‘living stones’ quite literally save lives as well as souls. ‘Origami’ architects that wring their hands and obfuscate the ‘hard issues’ while holding discussions-without-end do more harm than most of us are willing to see.

As globalization marches onward and our world grows ever ‘smaller’ may Almighty God raise up more and more leaders like our Primate, the Most Rev. Nicholas Okoh who will ‘stand in the gap’ and ‘build with living stones.’ And those determined to continue to construct with cardboard…we wish them all a pleasant, early and speedy retirement.

(The Rt. Rev. Julian M. Dobbs is Suffragan Bishop in the Convocation of Anglicans in North America)

Julian Dobbs is a former Anglican priest of the Nelson Diocese in ACNANP. Since Mr.Dobbs moved to the larger world of  North America’s TEC, he has joined, and been made a ‘bishop’ of, the schismatic ‘Convocation of Anglicans in North America’.

His scathing remarks here, about our Anglican Diocese of Christchurch’s decision to accept the ‘gratis’ offer of a temporary ‘Cardboard Cathedral’ design by an eminent Japanese architect, Shigeru Ban, is proffered on the basis of his wife’s former links with the City of Christchurch,  on the tenuous nature of which, he bases his quite provocative  criticism of our new, temporary, replacement for the Cathedral – demolished by the recent earthquake devastation of our inner city.

His mention of the fact that the architect happens to be Japanese, and a Buddhist, points to his religious fundamentalist outlook – quite proper to his movement from traditional Anglicanism to his new status as a ‘bishop’ in a schismatic Church which has separated itself out from the Episcopal Church in the United States of America.

One only needs to read his didactic religious statement on this thread to understand where Mr. Dobbs is actually coming from. And his special interview with the host of the oxymoronically-named ‘virtueonline’ web-site in the U.S. is proof enough of his provenance in the GAFCON/ACNA/CANA axis of conservative ex-Anglicanism which is about to flex its corporate spiritual muscles this month in the U.K., under the guise of an organisation self-designated as the ‘Fellowship of Confessing Anglicans’.

This sodality is not in favour of the Anglican Covenant, but on very different grounds from those of us who favour the more liberal and inclusive form of Anglicanism, that has marked out past generations of the world-wide Anglican Communion.

It’s perhaps as well Mr Dobbs is now living in the United States, and no longer in Aotearoa/New Zealand – but perhaps not so good for loyal members of The Episcopal Church, whose demise he is obviously interested in helping to facilitate.